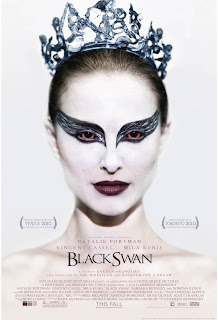 I know little about the ballet and pretty much nothing about .  Many of you would probably say the same thing.  I mention this because you should not avoid the movie Black Swan because you think it will be boring or something you would not be able to follow.  I watched Black Swan and thoroughly enjoyed it.  It is really a psychological thriller that keeps you guessing about what is actually happening.  I consider it to be the second best movie of the year.
The director, Darren Aronofsky, always delves into the minds of his characters.  His movies Pi, Requiem for a Dream, The Fountain, and The Wrestler have all dealt with obsession.  So does Black Swan.  His movies tend to provoke strong reactions.  The people who like his movies really like them.  The people who don’t like his movies really don’t like them.  Not too many people have an “It was okay” reaction when they get done watching one of his films.
Natalie Portman plays ballet dancer Nina Sayers in what is Portman's best performance to date.  She will likely win the Oscar for Best Actress and it is well deserved.  In order to be convincing as a prima ballerina she trained several hours a day for months, and dropped twenty pounds from a body that was already thin.  The movie opened with a shot of a ballerina’s dancing feet.  I said to myself, “That’s a double.  They’ll cut to a close-up of Portman’s head afterwards.”  Instead, they pan up her body to reveal that it is Portman herself who is doing the dancing.  This establishes right at the beginning that she is integrally invested in the role and believable as a dancer.  It also gives the filmmakers flexibility later on in the movie to actually double her for the more difficult sequences.
They do explain the basic plot of – innocent, pure White Swan falls in love, but the evil, seductress Black Swan steals the love away.  Nina has been chosen to be the lead in , which means she will dance both parts.  She will have to be both pure and evil, both innocent and seductress.  She is a person who strives for perfection.  Every dance move is controlled and precise.  This is perfect to dance the White Swan, but not the Black Swan.
The demanding stage director, played by Vincent Cassell, keeps drilling her, trying to get her to dance like the Black Swan needs to dance.  This might be impossible for her.  She is very tightly wound and repressed.  She doesn’t even know how to let go, to be not perfect.  She is especially very sexually repressed.  The director keeps pushing her buttons, trying to bring out her sexuality so that it will appear in the dance.  She wants to please him more than anything, and she may even have feelings for him, but she is fighting an uphill battle.
Making things even harder for her are her mother, played by Barbara Hershey, and a new dancer, played by Mila Kunis.  Her mother is very repressive and domineering.  She treats her twenty-something daughter as if she were still five years old and Nina allows it.  The mother also takes every chance to remind Nina that the mother had given up her own career as a ballet dancer when she became pregnant with Nina.  The mother is trying to live her life through her daughter, but maybe doesn’t want Nina to be more successful than she ever was.  The mother is also emotionally abusing Nina to make sure her daughter is completely dependent on her.
The new dancer is the exact opposite of Nina.  She is loose, relaxed, and definitely has a sexual vibe about her.  This both scares and fascinates Nina.  As the movie goes on, these two things merge to form another obsession.
The pressure to please her mother, to satisfy the director, and to fend off challenges (real or imagined) from the new dancer drive her to the breaking point.  We, the audience, start to see things that may be happening, or they may just be in Nina’s head.  She was already bulimic, as well as cutting herself by scratching her back until it bled.  Now she may not be able to keep it together emotionally and mentally in order to make it to the opening of .
From what they explain about the plot of , this movie parallels it.  Nina is obviously the White Swan.  The director and the role are her loves.  The new dancer is the Black Swan.  Will the new dancer take over Nina’s role in the ballet?  Will she be the Black Swan who steals away the White Swan’s love?  Will Nina be able to find in herself a Black Swan that can “destroy” the White Swan that she is?
I won’t say which because that would be a spoiler.  I will say that when we finally see the Black Swan dance in it is one of the most visually stunning scenes I have watched in a long time.
The only negative with the film is that for the first fifteen or twenty minutes they use a lot of shakycam cinematography.  That does quiet down, though, and for the rest of the film it is not so obtrusive.
The movie is currently in theaters.  The release dates for the DVD and Blu-ray have not been announced, but they are available for pre-order.
Unless you hate the other movies Darren Aronofsky has directed then I highly recommend this film.
Chip’s Rating: 4 out of 5 stars