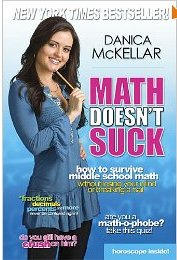 The author of this book is Danica McKellar.  If the name or her picture on the book cover look familiar, it’s because she is an actress best known for playing Winnie Cooper on the TV show The Wonder Years.  After the show got done she went to UCLA and in 1998 graduated Summa Cum Laude with a degree in Mathematics.  She has held the title of World’s Hottest Mathematician ever since.
Even though she went back into acting after college, over the years she has also promoted the importance of math in learning.  She especially wanted to encourage young girls to not be intimidated by math.  With that in mind she wrote this book that is geared towards Middle School girls.
You might be wondering “Is she really that good at math or did they just want to put a pretty actress on the cover of the book?”  Well, before she even graduated from UCLA she co-authored a new scientific proof that is now known as the Chayes-McKellar-Winn Theorem.  The title of the proof is “Percolation and Gibbs states multiplicity for ferromagnetic Ashkin-Teller Models on Z2.”  Here is a link to the entire nine page paper: http://www.danicamckellar.com/math/percolation.pdf.  Let me just say that I am not a dummy when it comes to either math or science, but this paper is far beyond my understanding.
Can she write a book on much simpler math for Middle School students, though?  The answer is yes.  She did enlist the help of education experts to ensure that her language was not too challenging for the reader.  The book is set up to make learning fun.  It has chapter titles like “Is Your Sister Trying to Cheat You Out of Your Fair Share?” (Comparing Fractions.)  The whole title of the book itself is “Math Doesn’t Suck: How to Survive Middle School Math Without Losing Your Mind or Breaking a Nail.”
The book is organized so that you can read it from beginning to end, or instead just go to a particular chapter that covers a topic that you want to work on.  While the book is definitely geared towards girls, a boy having trouble with math would also benefit from it, as long as you could get him to read “a girl’s book”, of course.  And yes, I have read it.  I won’t ever review something on this blog that I have not watched, read, hiked, or used.  I had heard good things about it and I was curious to see what all the fuss was about.
This book was very successful and became a New York Times Bestseller.  McKellar has followed it up with two more books dealing with pre-Algebra and Algebra, so that as your child matures they can continue to move up through the books.
McKellar also spends some time in the book giving personal anecdotes.  She’s not some math prodigy who was spouting calculus in Elementary School.  She was dying in math classes until a teacher helped her and she finally “got it.”  It’s that same kind of help that she is trying to pay forward now.  McKellar has said that she wrote the book "to show girls that math is accessible and relevant, and even a little glamorous" and to counteract "damaging social messages telling young girls that math and science aren't for them."
It you have a child, especially a daughter, anywhere in the 9-14 age range, and they could use some help in math, then you should definitely give this book a try.  At the very least it will give your child a view of math that is more fun that the very dry textbooks their school has issued them.