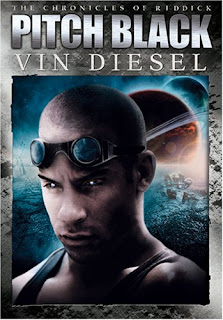 Pitch Black is the classic “group of people caught in a dangerous situation just trying to get home.”  It could have been a western with cowboys surrounded by Indians, or a contemporary movie with people trapped by criminals.  In this case, it is a science fiction movie.  Not unlike John Wayne becoming a star after doing Stagecoach (an example of a Western version), Vin Diesel is the breakout star of this movie.
They establish his character’s badassness right away by showing him being transported to prison in chains.  The ship Riddick is in carries quite a few people.  It gets damaged by some passing debris and the pilot is forced to try to crash land on the nearest planet.  Only eleven people survive, including Riddick.  His hands are chained behind a beam against his back.  The crash has separated the beam from the ceiling.  He slowly lifts his hands back up over his head, dislocating both shoulders without so much as a sound from him, and then finally brings them down in front of him.
At first the survivors are worried about Riddick being loose, but then they get something else to worry about.  They find the remains of a colony from years before.  There are references to some devastation that happened when the planet went dark twenty-some years earlier.  The planet is located near the center of the galaxy, which means there are many more stars (suns) around.  When the planet’s rotation hides one, there are two others still providing perpetual sunlight.  They figure out that once every 20-30 years the various suns either all set or the moons around the planet eclipse the visible suns and the planet goes dark.  They are unable to get off the planet before that and they find out what happens – creatures that live underground in perpetual darkness are now free to be able to come to the surface and hunt.
They show just how deadly these creatures are.  Their only weakness appears to be light, but can the survivors keep light sources going long enough to last through the darkness?  Even though he might be dangerous to them, they enlist the help of Riddick because of his intelligence and survival instincts.  He can also see better in the dark than any of the others.
There is a great scene where a creature lands right in front of Riddick.  You wonder how he will not be dead meat.  He has figured out they have a blind spot and he stays in it.  He closes in, and with nothing more than a knife, he kills the creature.  He says about the dead creature, “Did not know who he was f*ckin’ with.”
This movie had a sequel called The Chronicles of Riddick.  Some people hated it, but I liked it.  I later found out I had seen the director’s cut, not the theatrical version.  In the commentary they kept pointing out scene after scene that had been cut.  As it turns out, the studio took the movie and cut almost everything that wasn’t an action scene, which meant the movie made no sense.  It was no wonder people hated the theatrical version.  I definitely recommend watching the director’s cut of The Chronicles of Riddick.
After Pitch Black came out Diesel got typecast into the action movie genre.  He really only got to do one movie – Find Me Guilty – that showed he could be intelligent and act.  He’s still got a decent career ahead of him, though, so who knows what else he might come out with.
I definitely recommend Pitch Black.  In many ways it is a good old fashioned surviving against impossible odds kind of movie, but with a very memorable character.
Chip’s Rating: 4 out of 5 stars