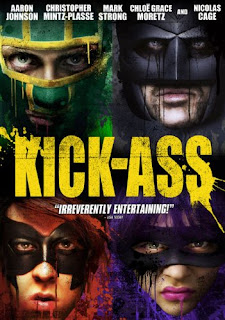 Kick-Ass was the first bigger budget movie to ask the question – what would it be like if a normal person decided to put on an outfit and try to fight crime?  There would be no lifting trucks, seeing through walls, reading minds, fancy cars, jets, boats, gadgets, etc.  The result is a very entertaining movie, one that is mostly comedic, but one that has some dramatic moments as well.  I consider this to be the third best movie of all of 2010.

The movie stars all unknowns, except for Nicolas Cage.  It’s not a “Nicolas Cage movie”, though.  He is not the star; he’s just a supporting part of a larger ensemble.

Aaron Johnson plays the title character, whose real name is Dave Lizewski.  He’s just a normal teenager who is a fan of comics.  He hangs out with a couple of friends.  One day he asks them why everyone wants to be the latest reality star, but no one wants to be Spider-Man or Batman and try to do some good.  They respond “because he’d get killed.”  He can’t get the idea out of his head so he orders clothing off the internet and assembles a costume of sorts.  He has fun for a while in his bedroom pretending he’s a superhero.  He finally decides to go out in public.  As you might expect things do not go well at all.  He tries again, and through sheer happenstance ends up becoming a YouTube phenomenon as the superhero Kick-Ass.  This draws the attention of Nicolas Cage’s character, as well as criminals.

The breakout star from this movie is Chloe Grace Moretz.  She plays an eleven year old girl who is the daughter of Cage’s character.  She does a fantastic job in this movie, both with the acting and with the physical stunts and fighting skills.  Her character does not have a normal father-daughter relationship.  She is all about weapons and fighting.  She is also the foulest mouthed character in the whole movie, which makes for a funny dichotomy.  I love the character she plays.  She is the best thing in a great movie.

You do find out the back story on why her father has raised her the way he has and why they are waging a two person war to wipe out a crime boss.  As you can imagine, Kick-Ass eventually runs into these two, known as Big Daddy and Hit Girl.

Things start to turn south for Kick-Ass when the crime boss mistakes the harm being done to him by Big Daddy and Hit Girl as coming from Kick-Ass instead.  He decides to eliminate Kick-Ass.

There are some great fighting sequences in this movie, especially from Hit Girl.  They also play up that it is an eleven year old girl doing these things by playing some very sugary “La La La” music over her first big action sequence.

In the extras on the disk there are a couple of sequences with Moretz you should watch.  One shows her running through some stunts on a soundstage, doing flips and pretending to fire a gun.  The second is a candid moment where one of the assistant directors is teasing her and her retort is “yes, but can you flip a butterfly knife?”  She reaches for the one he has in his hand and proceeds to run through about 30 seconds of flipping the thing around - basically being a kid showing off, but with a very adult weapon.  She had learned how to handle one because her character in the movie had to.

Although the movie is set up for a sequel, it does not leave you hanging.  It is its own self-contained movie.  No one knows for sure when the sequel might come because the author of the graphic novel that this was based on is still trying to come up with the story.

This is a very entertaining movie with a good balance of humor and drama.  In addition to the main plot there are subplots dealing with the crime boss and his son, with Lizewski and a girl he likes, and with Lizewski and his friends.  It does earn its R rating with the violence and language in it, so it’s not for little kids.  For everyone else, I highly recommend this movie.