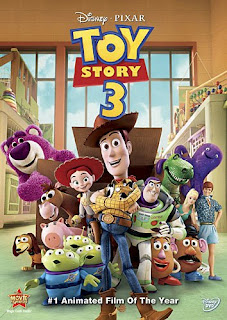 One of these days Pixar may finally produce a movie that is a dud.  This is not that day.  Toy Story 3 is hugely entertaining, action-packed, funny, and very poignant.  I used to consider Toy Story 2 to be the best movie to come out of Pixar, but I think this one might be even better.  Of the ten movies nominated for the 2011 Best Picture Oscar, this is the one that I consider to be the best.

The movie opens several years after the last one.  The boy who owns them, Andy, has now grown up and is getting ready to attend college.  He hasn’t played with the toys much in recent years and this is tough for them, to be mostly forgotten.

Andy’s mother forces him to clean up his room before he leaves.  He’s got to take stuff with him to college, pack them up and put them in the attic, donate them to a daycare, or throw out anything he doesn’t want.  All the toys except for Woody get packed for the attic, but by mistake they end up out on the curb for garbage pickup.  This creates friction between Woody and the other toys.  They manage to get themselves into the daycare donation box.  Thus starts their adventure in a whole new world.

The movie deals with the love and loss of growing up, moving on, and letting go.  There are a couple of very poignant scenes dealing with letting go, for Andy, for the toys, and even for us.

The movie is not a downer, though.  Like all Pixar movies there are a great many jokes.  They also have some big action scenes where they’ve got to save themselves from situations they have gotten into.  There are one or two scenes that might be too scary for the very youngest children.  The toys are particularly in a lot of danger in one of them.

Toy Story 3 is available on DVD and Blu-ray, so it is easy to see.  As an added bonus, the Pixar animated short that also received an Oscar nomination this year – Day & Night – can be found on the Toy Story 3 disk.  If you haven’t seen the first two movies, I would recommend watching them before seeing this one.  You will miss a bunch of jokes if you do not.

I know some people see “animated” and figure the movie is only for kids.  Pixar has never made movies just for kids and Toy Story 3 is no exception.  It is literally the best reviewed movie of the year, and has an unheard of 99% Fresh rating on Rotten Tomatoes.

I give this movie my highest recommendation.