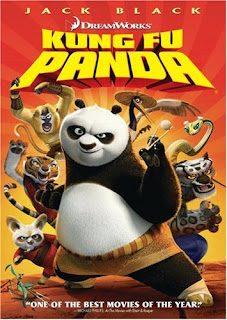 Yes, this is a kung fu movie, but one with a silly, animated fat panda as the lead.  How can this be a movie with a badass?  In this case, it is the villain who is a badass.  In most movies, what makes a great hero is the skill of the villain that he has to defeat.  This movie is both a spoof of, and homage to, kung fu movies.  The two of these things combine to create a villain that is so badass that you can’t imagine how he can be defeated.
The villain, Tai Lung, is a former student of the supreme kung fu master.  He had a major falling out with the master, though, and turned evil.  It was only through the skills of the supreme master that Tai Lung was defeated and imprisoned.  And what a prison it is.  They show the many guards, the almost bottomless pit, the ladders extended only to get down, and Tai Lung almost completely encased in solid metal chains keeping arms, legs, and head completely immobile.  After establishing just how impossible it is to break out, and even after adding more guards, they show Tai Lung using nothing more than a feather and his own skills to escape.  It is a great action sequence where he overcomes obstacle after obstacle to get free.
Meanwhile, through a series of misadventures a panda bear with no martial arts training is chosen as the new Dragon Warrior.  The five protégés who have been training their entire lives are dismayed by this.  The old master who defeated Tai Lung is dead and they know the panda will have to go up against Tai Lung.  They are the champions at their kung fu disciplines, represented literally by their characters, Tiger, Monkey, Crane, Mantis, and Viper.  They try to stop him, but Tai Lung defeats these champions easily.  He moves on to confront the panda and the one remaining teacher.
This movie is very entertaining.  It is quite funny in places, especially when they show the panda trying to be trained in the martial arts.  If you watch martial arts movies there are many little things put in this one as homages, not the least of which is getting Jackie Chan to voice Monkey.  Even if you know nothing about martial arts movies you can still enjoy it for the humor and the action.
By the way, there is a sequel to this movie coming in May 2011.  You can read my review of it here.
Kung Fu Panda is a movie that can be enjoyed by everyone.  I definitely recommend it for its humor, action, and seriously badass villain.
Chip’s Rating: 4 out of 5 stars