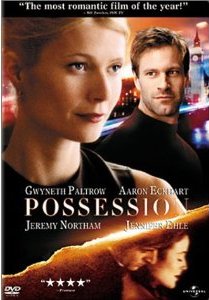 Possession is a very romantic drama.  It is a smaller movie that got a little lost between more commercial movies Gwyneth Paltrow did like Shallow Hal and Austin Powers.  It is probably the most traditionally romantic movie of the four where she played a Brit.  It is also quite an intelligent mystery story that keeps the film moving along as clues are uncovered.
This movie tells two parallel romances.  The modern one involves Roland Michell, an American trying to make it in the world of British Academia.  He is played by Aaron Eckhart (Erin Brockovich, Thank You for Smoking.)  Michell is researching 19th century British poet Randolph Ash.  He runs across a couple of letters the poet wrote.  His best guess is that they were to female poet Christabel Lamotte.  In order to confirm this he goes to the foremost expert on Lamotte, Dr. Maud Bailey (Gwyneth Paltrow.)
She rejects his assumption of a secret, forbidden romance between those two poets, primarily because Lamotte was believed to “prefer the company of other women.”  He shows her his evidence and she is a little intrigued.  She agrees to help him, if only to prove him wrong.
They play up the contrasts between the two.  She is the reserved, more successful Brit.  He is the brash, up and coming American.  He breaks her out of some of her hidebound limitations and gets her to open up.  As they start finding a few more clues, she starts getting more and more intrigued.  They also show the growing attraction between the two of them.  Their research is turning into foreplay and their collaboration into love.
I mentioned two romances.  The other is between Ash, played by Jeremy Northam (Emma) and Lamotte, played by Jennifer Ehle (The King’s Speech.)  As the two modern researchers are finding clues, the movie will flashback and show how that poem, letter, or object played into the relationship between the two poets.  Just as much time is given to these two people as to the modern ones.  Look for an almost unrecognizable Lena Headey (Imagine Me & You, 300) as Lamotte’s companion and presumed lover.
There is a great sequence that ties the two stories together.  Early on the modern researchers find a cache of letters between Ash and Lamotte.  Each of them takes turns reading the letters out loud to the other, he reading Ash’s and she reading Lamotte’s.  The movie shifts back and forth among the reading of the letters, the writing of them, and the events that inspired the writing.  As the modern researchers are reading these romantic words written by two great poets they can’t help but be moved themselves.  It’s the first real connection that Roland and Maud make with each other.
I won’t spoil the ending, but I will say that once the mystery is fully uncovered there is a great revelation for the two modern researchers.
This movie is based on the 1990 Booker Prize award winning novel by A. S. Byatt.  (The Booker Prize is the ’s equivalent to the Pulitzer Prize.)

Unless you hate light romantic dramas and/or mysteries, then this movie is highly recommended.
Chip’s Rating: 4 out of 5 stars