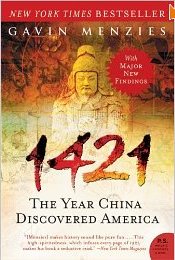 From the title of this book you might think that it is fiction – an alternate history.  It is actually a non-fiction book published in 2003 by Gavin Menzies.  In it he details how ten years earlier he discovered in an old map that knew about the Caribbean islands of Puerto Rico and Guadeloupe decades before traveled across the .  This revelation led to him finding other old maps that accurately detailed the coasts of Patagonia, the , the Antarctic mainland and the – all long before Europeans had “discovered” them.  Other old maps showed and the west coast of .  The only conclusion was that there must have been a massive effort to map the world carried out in the early 1400s.  Only one nation on Earth at the time had the naval capabilities to do that – .
The author was a captain in the British Royal Navy for many years.  He sailed many of the routes that European explorers like Magellan had taken.  He became familiar with the drift of the ocean currents, ones that can take a ship far away from the course that they think they are on.  Without knowledge of longitude, maps would have been so inaccurate in places that they would have been dismissed as completely worthless to a modern eye.  It was by taking a look at some of these old “worthless” maps that Menzies realized they were actually accurate for the time period they were drawn in.
Armed with this knowledge he spent the next ten years traveling around the globe looking for any hard evidence of ’s voyages.  The logical place to look – – was one that would be a huge challenge.  It was shortly after these voyages would have to have been taken that a new emperor took power and he decreed that look inward, not outward.  He had all documents detailing ’s relations with other countries and the accomplishments of the prior emperor destroyed.
The author managed to find a few records in , which led him to other countries.  He started fitting pieces together.  There were strange carved rocks left in various places around the globe, including and the eastern   The carvings on the rocks had never been translated.  He brought in experts on medieval Chinese pictograms and they were able to partially translate the texts.  They detailed great ships that sailed from in 1421.
He looked for other evidence.  He found that the languages of several tribes of South American natives included words, both in sound and meaning, that were very similar to medieval Chinese.  Looking closer in these areas revealed plants and animals that would have had to been introduced from .  He even found some DNA evidence among several peoples around the globe that indicate that centuries ago there would have been Chinese blood mixing with the natives.
Once he started publicizing his findings and asking others for help he started to get a number of people sending him mysterious things that had been found.  Assuming that was globally seafaring actually helped make sense of some of them.  For instance, the wrecks of Chinese junks (ships) have been found off the west coast of .  The carbon dating done revealed them to be much older than they should have been.  No one knew what to make of that.  Shards of Chinese pottery and other artifacts had also been found in North and – ones that date back several hundred years.
The author goes into quite a bit of detail on all of these things.  He knows that it will take a lot of convincing to get people to accept a whole new history of seagoing discovery.  He did take a lot of flak from official historians when he published this book, but at least some of them did admit that he could be on to something.
While I do not agree that he has enough evidence for all of his secondary conclusions, and while he sometimes makes leaps that are way too big, he did convince me of the major thing – China did reach the shores of North America decades before Columbus did.  (Of course, the Vikings beat them both, but they did not go further than northern .)
Even if you don’t like history, this book offers discussions of sailing, map making, native peoples, genetics, politics, and science.  It is an interesting read.  If any of what I have described sounds intriguing to you then I recommend this book.

Paperback
Posted by Chip Lary at 11:30 AM