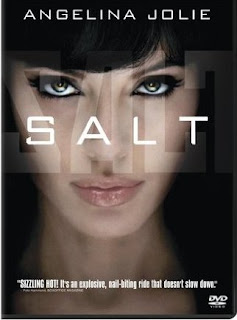 Salt is an action movie starring Angelina Jolie.  While it is not as good as her movie Mr. & Mrs. Smith, it is better than her Lara Croft movies.  It may also bring you some surprises.
The premise is that the CIA gets a walk in – a man claiming to have information on Russian spies that have infiltrated the CIA.  Walk ins are interviewed to see if they set off any bullshit detectors with their stories.  The finest interviewer the CIA has is Jolie’s character, Evelyn Salt.
She sits down with this man and he tells her that there is going to be an attempt to kill a visiting dignitary in in a few days.  This attempt will be carried out by a spy that has infiltrated the CIA.  She asks who the spy is.  He says that the name of the spy is Evelyn Salt.  She says that her name is Evelyn Salt.  He says that she must then be the spy.
They remove her from the interview room and put her in another room for safekeeping until they can figure out what this guy is up to and how he knew enough to even know her name.  She pleads to be let go.  She is worried that her husband is in danger.  If they know of her then it stands to reason that they know that she is married and where she and her husband live.  Her boss, played by Liev Shreiber (Scream, Wolverine) won’t let her out because he is concerned for her safety as a CIA asset.  Salt takes matters into her own hands and escapes from the building.  That makes her look guilty.  She becomes a wanted person on the run from the CIA.  In the confusion, the walk in also escapes, which makes her look even worse.
It was about this point where I said to myself, “You know what would be interesting is if they did X” where X is a spoiler.  It turned out that’s what the movie did.  That’s what lifted this movie into a three star level for me.
The movie was nominated for Best Sound Mixing.  I couldn’t tell you if it was good, bad, or otherwise.  I’ve probably seen 5,000 movies and when they have gotten done I have yet to think “that movie had great sound mixing in it.”
Jolie gets to kick some ass, hang off a building, shoot some guns, and blow up some things.  It is obviously set up for a sequel, but it doesn’t leave you hanging in this movie.  If you are looking for a decent action film that may bring a surprise or two then you should give this one a try.
Chip’s Rating: 3 out of 5 stars