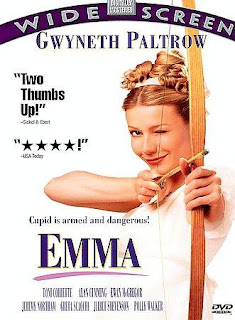 When Alicia Silverstone’s movie Clueless came out in 1995, it was quite popular.  The writer/director Amy Heckerling was asked how she came up with the idea and she confessed that she had basically just taken Jane Austen’s book Emma and put it in a modern setting.  That caused interest in the book and the very next year a new version of Emma was filmed.  Along with the 1995 Sense and Sensibility movie this caused a huge revival in popularity for Jane Austen.
Emma stars Gwyneth Paltrow as the title character - a young woman in 1800s .  She decides that she is the one to bring happiness to her friends, so she sets out to play matchmaker for them.  She also takes a young woman under her wing, teaching her how to fit in better in polite society.  Her attempts to link people up are humorously complicated by the fact that she thinks she knows a lot more about romance than she actually does.  While she is trying to match up everyone else, she is, of course, blind to what she has right in front of her in the person of Mr. Knightley.
Jeremy Northam (The Net; Happy, ; Possession) was the go to guy for a while in the 1990s when moviemakers needed a leading man who could be refined, charming and sometimes dangerous.  As Mr. Knightley in Emma he is much more the charmer.
Even though I had seen Paltrow prior to this in Se7en and The Pallbearer, Emma was the first movie where I felt she had some real screen presence.  She is the center of the movie and she carries it off quite well.
Look also for an early-in-his-career appearance by Ewan McGregor (Star Wars Episodes I, II, and III.)  The same year he did Emma he also did Trainspotting, the movie that made him a star.  You could not find two more different kinds of characters as the ones he played in these 1996 movies.
If you’ve seen Clueless then you generally know how this movie goes as well.  Emma stands on its own, though.  There are a lot of differences between 1800s and 1990s southern .
If you liked Clueless then you should see the story that it was based on.  Give this movie a try.
Chip’s Rating: 3 out of 5 stars