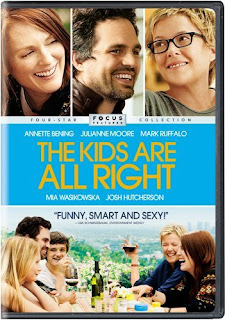 The Kids Are All Right has the most humor of any of the Best Picture nominees, other than Toy Story 3, of course.  Unfortunately, the filmmakers decided to have the movie turn dramatic in the last third of it.  This weakens the movie some.  It is still a good enough movie to recommend, but it could have been so much better if they had kept it a comedy.
The premise of the movie is that two gay women (Annette Benning and Julianne Moore) have been married for more than twenty years.  They have two children that they conceived by using sperm from a sperm bank.  They never knew the donor.  The daughter (Mia Wasikowska) has turned eighteen and will be heading off to college in the fall.  Her younger brother (Josh Hutcherson) wants to know who his father is.  You have to be an adult to ask for that info, so he convinces his sister to initiate the search.  The sperm donor (Mark Ruffalo) is contacted and even though he is a little thrown, he agrees to meet with them.  The kids do this in secret, but eventually their mothers find out.  This puts a whole new dynamic into the family.
You might think this is a “message” movie about how lesbians are just super and wonderful and better than men at everything.  Even though the writer/director is a gay woman herself that is not what this movie is about.  The family situation is presented as no big deal, with the usual conflicts and happiness that any long term marriage has.  It’s not anything that drives the story along; it just is.  In my opinion, this is how it should be.
Critics obviously are making a very big deal about this family set up, though.  If the events of this movie had been presented as happening to a husband/wife led family then it would be just another movie plot that has been seen a hundred times before.  It would be considered entertaining, but nothing special.
Benning has been nominated for a Best Actress award, but was not nominated at all.  Of the two I actually thought did a better job in her role.  Benning plays the kind of person who makes everyone else around her feel worse.  She is controlling, belittling, and always expressing disapproval of everything her wife and children are doing.  She is established as so unlikable that later in the movie when you are obviously supposed to be feeling sympathy for her, I did not.  I felt even though it was the actions of others that hurt her, she deserved some unhappiness of her own after how she had made everyone else unhappy.  She doesn’t learn a lesson from all of this, either.  She never goes through any character development.
In contrast, ’s character goes through a wide arc.  She plays several different changes.  I was impressed by her range.  Yes, it may be the fact that Benning plays such an unlikable character that it is coloring my judgment.
Ruffalo is also nominated for Best Supporting Actor.  He does a good job, but there were better performances among the other nominees.  His character is the most likable in the film.
I mentioned that the movie switches from being a light comedy to being a heavy drama.  This is one of the two biggest weaknesses with the film.  First, the event that causes this change just isn’t believable.  If anyone other than a gay woman had written the script the event would have been condemned as just a typical male fantasy.  Even then, the event would have worked if it had been done comedically.  It could have led to some very funny scenes as others become aware of what happened.  Instead, as others become aware of it, it is used to try to create drama and friction among the characters.
The second weakness with this movie is that there is no closure for Ruffalo’s character.  That would be okay if he was unimportant to the film, but he is shown throughout as being integral to the events in the movie and the changes the characters go through.  There is also a subplot with the daughter and a boy she likes that is just dropped.  It’s as if the writer/director didn’t quite know how to end the stories for these people so she just concentrated on the two women at the expense of the other characters.
Despite these two things, the movie is still worth checking out for the humor.  If you were planning to see it, go ahead.  It has been released on DVD and Blu-ray, so it is easy to see.
Chip’s Rating: 3 out of 5 stars