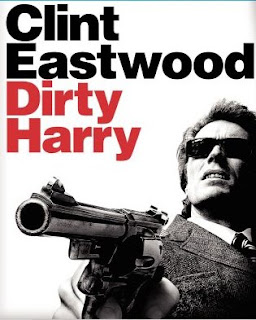 The movie Dirty Harry didn’t invent the maverick cop genre (Bullitt is an earlier example), but it sure cemented it in the public consciousness.  Harry Callahan is a cop who has little patience for politics or legal procedure.  Anything that prevents him from getting scum off the streets is bad in his book and he will often disregard it.  He also carries a .44 magnum gun, which is much too powerful for use on the streets.  After this movie came out a “Dirty Harry” moment or act became part of the language.  The list of movie and TV references on IMDB is a mile long.  This movie also has the famous “Do you feel lucky?” quote, which is one of the most misquoted lines in movie history.

Most people say “Do you feel lucky punk?” when they are pretending to be Dirty Harry.  Here’s the actual quote:  “I know what you're thinking. ‘Did he fire six shots or only five?’ Well, to tell you the truth, in all this excitement I kind of lost track myself. But being as this is a .44 Magnum, the most powerful handgun in the world, and would blow your head clean off, you've got to ask yourself one question: Do I feel lucky? Well, do ya, punk?”  Harry actually says this twice in the movie, with a good payoff the first time and a great payoff the second.  It’s Eastwood’s delivery of the lines that made them so memorable.

The plot of this movie is loosely based on the real investigation into the Zodiac killer.  In the late 60s and early 70s there was a serial killer in and around that taunted police with notes and demands.  In Dirty Harry the bad guy is “Scorpio” and he does some of the same things that the Zodiac killer did.  The real life lead Zodiac investigator, David Toschi, was the basis for Harry Callahan, although he was nowhere near as extreme.  There was a 2007 movie that tried to show a more realistic picture of the investigation into the Zodiac killer.  There is a great scene in the movie (named Zodiac) where Toschi goes to see the Dirty Harry movie and has a line about how unrealistic cop movies are.  Of course, we are watching a cop movie ourselves.

The character of Dirty Harry was very popular and it spawned four more movies – Magnum Force (1973), The Enforcer 1976), Sudden Impact (1983), and The Dead Pool (1988).  If you watch The Dead Pool look for a pre-stardom Jim Carrey as a strung out rock star shooting a music video to the then-unknown Guns ‘n’ Roses song Welcome to the Jungle.  Members of GnR make a cameo late in the movie, too.

All of those movies are similar in nature, but if you want to see the one that started it all, then watch Dirty Harry.