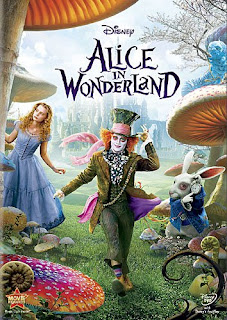 This movie is a bit schizophrenic (which may be fitting since it features both a Mad Hatter and a March Hare.)  It suffers from the same problem that hurt Superman Returns (2006) – it can’t decide it if is a remake or a sequel.  Once it finally does decide, though, it is an entertaining movie.
Mia Wasikowska (The Kids Are All Right) plays .  She is not a child, though.  She is of marriageable age.  During the affair where her engagement is to be announced she sees a white rabbit.  She follows him and falls down his hole.  She goes through many of the adventures from both in Wonderland and its sequel Through the Looking Glass.  This is the section that is pretty much a remake.
Johnny Depp plays the Mad Hatter.  This is the seventh movie that he has done with director Tim Burton.  The Hatter only appears for a short while in the book, so I wasn’t sure how they were going to expand his role in the movie.  They did it by diverging from the stories and adding a whole plot where he is at odds with the Red Queen (not the Queen of Hearts like in the book for some reason.)  Helena Bonham Carter (The King’s Speech) plays the Red Queen.  This is her sixth movie with .  This expanded section for the Hatter is where it gets into sequel territory.
The sets, costumes, and special effects are all as weird as you would imagine either a Tim Burton movie, or an in Wonderland movie would be.  These are the three categories where the movie earned Oscar nominations.  The CGI is great in some areas and not so great in others.  The Cheshire Cat was very well done, as was the Red Queen.  Tweedle Dee and Tweedle Dum, however, looked like they were early stage placeholders that never got the CGI finishing that everything else got.
Despite the weirdness of the role, Depp actually adds some depth to his portrayal of the Hatter, especially in the sequel section.  He’s not just spouting weird stuff all the time.  Wasikowska is just sort of there.  She doesn’t add too much through most of the movie, but she does get a couple good scenes near the end.  Even though she’s the title character, it’s really ’s and Depp’s movie, not hers.
Although it could have been better, this movie is still good enough to recommend.  If it sounds interesting then give it a try.
Chip’s Rating: 3 out of 5 stars