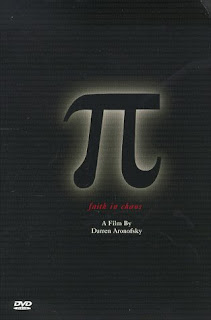 Pi was the first movie from director Darren Aronofsky.  He would go on to do Requiem for a Dream (2000), The Fountain (2006), The Wrestler (2008) and Black Swan (2011).  [You can read my review of Black Swan here.]  Aronofsky co-wrote Pi with the star of the movie Sean Gullette.  Pi is a very low budget first feature that nevertheless manages to strike a chord with many viewers.  It is also an early look at the kinds of things that Aronofsky would continue to put into his movies.  If you only know him from his later films, this movie would be interesting for you to see.
Read more »
Posted by Chip Lary at 3:40 PM No comments: 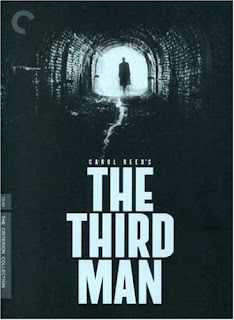 The Third Man is one of the three must see Orson Welles movies.  The other two are Citizen Kane (1941) and Touch of Evil (1958).  Unlike those two, Welles did not direct himself in The Third Man.  The movie was directed instead by Carol Reed and it stars Joseph Cotten (Citizen Kane, Shadow of a Doubt, Gaslight.)  Also appearing are Alida Valli (Senso), Trevor Howard (Brief Encounter), and Bernard Lee (M from the first twelve James Bond movies.)
Read more »
Posted by Chip Lary at 2:37 PM No comments: 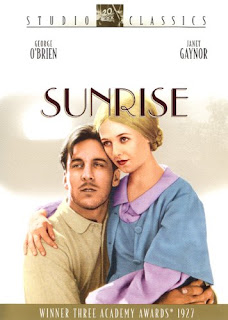 Some people consider : A Song of Two Humans to be a co-Best Picture Academy Award winner.  The first year the Academy Awards were handed out the categories were different than in all subsequent years.  Among those were separate awards for “Best Picture, Production” and “Best Picture, Unique and Artistic Production”.  Wings (1927) won the Best Picture, Production award, and since all subsequent Best Picture Awards were given to the producers of the films, it is considered the equivalent of all the other Best Picture winners.  This leaves : A Song of Two Humans on the outside looking in.  Since some people prefer it to Wings, the argument that it should also be considered a true Best Picture winner was born.  I say just watch and enjoy both films.
Read more »
Posted by Chip Lary at 9:48 AM 1 comment: 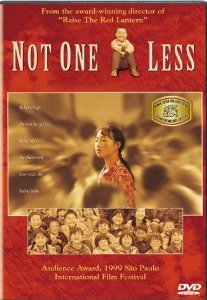 Director Zhang Yimou established himself in the early 1990s with such films as Ju Dou and Raise the Red Lantern.  In the 2000s he turned his considerable talents to a set of wuxia movies.  In between he did some quieter films.  Among them was the movie Not One Less.  The title of the movie is actually shown with the picture of a child between the words “One” and “Less”, making the title more like “Not One Child Less.”  That’s important because that is the theme of the movie.
Read more »
Posted by Chip Lary at 7:12 PM 2 comments: 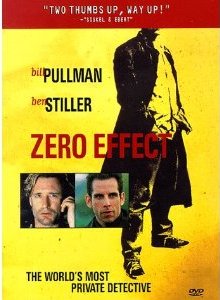 Zero Effect is a smaller movie by first time writer/director Jake Kasdan.  It is primarily a mystery movie, with some comedic moments, and a little bit of noir mixed in.  For Sherlock Holmes readers, it is a modern day retelling of the story A Scandal in .  This is the one that featured Irene Adler in it.  Even though none of the characters in Zero Effect are named after Sir Arthur Conan Doyle’s characters, and even though it is set in modern times, it is a far better representation of Sherlock Holmes than the 2009 Robert Downey, Jr. movie.
Read more »
Posted by Chip Lary at 1:31 PM 4 comments:

Movies by the Numbers

“Look who’s got a bad case of Dark Prince envy…..And where’d you get that accent, Sesame Street?  [mocking accent]  Vun, two, three ––– three victims!  Mwah, ha, ha, ha!” – Xander Harris to Dracula, Buffy the Vampire Slayer TV Show
Did you ever notice how many movies have some kind of number in the title?  You can pretty much find a movie with every number from 1 all the way up to 50 in the name.  I’ve decided to do a large series of posts reviewing movies from 1 to 50, plus any other numbers that I find worthy.
To do this I could use your help.  I’m pretty much set for numbers 1 to 13 on movies I’ve both seen and would recommend, but I have no idea what to write about for 14.  Other numbers up to 50 I could use some suggestions for are 18, 20, 22-27, 29, 31-33, 38, 41, and 43-47.  In addition, I’ve seen Less Than Zero, but didn’t feel it was a three star movie.  I have not seen either Zerophilia or The Zero Effect.  Would anyone recommend either of those?
A few guidelines:
I’m going to be leaving for a hiking vacation after I post this, so I will check back in a week or so.  Hopefully now that I’ve got some serious movie fans as Followers I can get some interesting suggestions on movies to see and write about.
As I post for each number I will update the table below with a link to the movie.  I have already populated it with links for numbered movies that I have previously posted.  This list is not set in stone.  I may add more numbers to it, and I may not end up doing some of them, if no good candidate can be found.  One other note – the movies I pick will not necessarily be the “greatest” movie for that number.  I may pick some lesser known movies that I feel deserve to be seen.

On to the reviews…

Movies where Women have Big Guns

“You got the .50 up? ....... What the f*ck?  What the f*ck are you trying to shoot?  A jumbo jet out of the sky?  Blast down the moon?” – Georgia Sykes to her female partner, Smokin’ Aces
No, the title is not a euphemism.  If you are hoping to see an exploration of Russ Meyer movies, or the oeuvre of Pamela Anderson, then you are going to be disappointed.  The title is meant literally.  And we’re not talking about big handguns, or even machine guns, but some seriously big guns.  And no, I’m not going to go all Freudian on what these guns represent for the women, either.  Sorry if I disappointed again.
Women with big guns (in the literal sense) have been a relatively recent change in movies.  In fact, when the first movie on this list, La Femme Nikita, came out in 1990 the image of the lead actress holding a huge sniper rifle was everywhere when advertising the movie precisely because it was such a different image.
It still took quite a few years after that before another movie had a main female character wielding a big gun.  Sure, in 1998’s Lock, Stock, and Two Smoking Barrels there was a funny scene with a woman firing a big gun, but she was a very minor character and it was for comic relief.  I’m not going to include that one in this category.
Smokin’ Aces in 2006 is the next movie without no-name actors in it that I can remember having a woman knowing her way around a big gun.  Finally, in the 2010 movie Red, we got to see Helen Mirren, “the Queen” herself, firing a huge gun (while in elegant evening wear, no less.)
You might be wondering, “Where’s Vasquez from Aliens?  Or even Ripley strapping the flamethrower and gun together in the same movie?”  I’m saving that movie for another category, but when I do post on it I will tie it back to this category.
You can find my posts for these movies here:
La Femme Nikita (1990)
Smokin' Aces (2006)
Red (2010)
On to the reviews…
Posted by Chip Lary at 5:28 PM No comments: 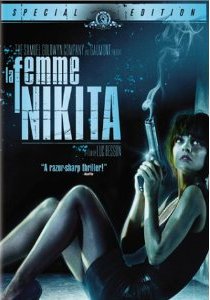 La Femme Nikita was the first introduction to writer/director Luc Besson for most Americans.  And what an introduction it was.  This movie just exploded in a big way and many people found themselves watching a foreign action movie for the first time.  Besson would go on to an even greater accomplishment a few years later with : The Professional.  [You can read my post on that here.]
What set La Femme Nikita (and Leon) apart from other action movies of the time was the level of emotion that was invested in the characters.  These weren’t some indestructible killing machines or two dimensional good guys; these were real people put in extraordinary circumstances and you cared about what happened to them.  This is truly an action film for both men and women.
Read more »
Posted by Chip Lary at 5:22 PM No comments: 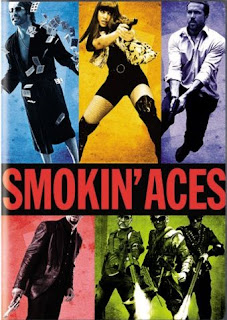 Is Smokin’ Aces a great movie?  No.  Does Smokin’ Aces bring new levels of art to the film industry?  No.  Does Smokin’ Aces bring understanding and peace to a tattered world?  No.  Is Smokin’ Aces a fun movie to watch?  Yes.
The premise of the movie is that entertainer Buddy “Aces” (Jeremy Piven chewing the scenery) has decided to testify against the mob.  He holes up in a hotel room in to try to get away from the retaliation.  A bounty is put on his head and a small army of assassins show up to claim the bounty.  The FBI is trying to get there to protect him.  Security at the hotel gets involved, too.
Read more »
Posted by Chip Lary at 5:10 PM No comments: 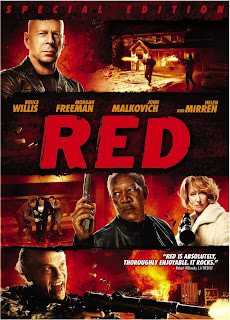 Red stars Bruce Willis, Helen Mirren, John Malkovich, and Morgan Freemen as four retired operatives for the CIA and MI-6.  “Red” is their designation.  It stands for “Retired, Extremely Dangerous.”  The movie is based on the Warren Ellis graphic novel of the same name.  While Morgan Freeman is a bit underused, this is a fun movie precisely because of who was cast to play the operatives.
Read more »
Posted by Chip Lary at 5:00 PM No comments:

I’m going to do a little quiz from time to time as I run across photos that apply.  How will the quiz work?  I will post a photo and from that you try to figure out what movie it refers to.
If you missed it, you can see #1 here.
I’ll do another easy one this time.  Here is the picture.  What is the movie? 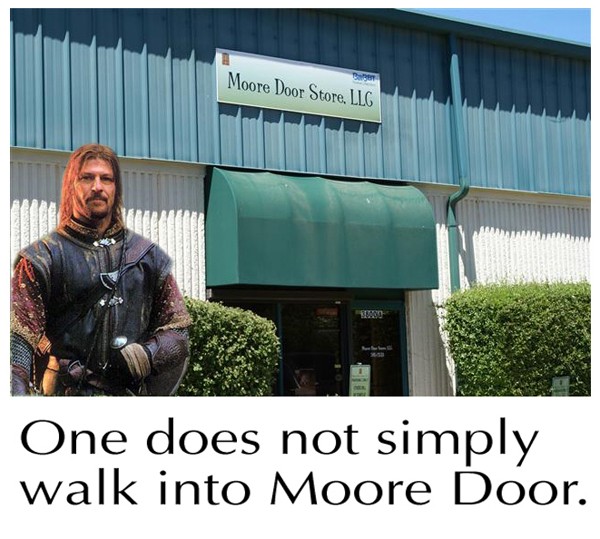