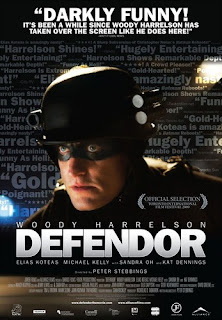 Defendor is a small independent film that takes a look at one man who tries to be a superhero and stop bad guys.  It starts out comedic, but as it goes along and you learn more about this character, it slowly shifts to being a drama.  If you watch this I think it will go places that you do not expect.

Woody Harrelson plays the title character, whose real name is Arthur Poppington.  He is a little slow mentally.  He goes out at night and tries to help people.  He is searching for Captain Industry, who he is convinced is the ultimate villain that needs to be stopped.

One night he runs across a bad cop (Elias Koteas) who is hurting a prostitute (Kat Dennings.)  He manages to hurt the cop some and this makes him an enemy.  The prostitute isn’t the clichéd heart of gold type, either.  She’s not happy that Poppington cost her a trick and she decides to try to take advantage of him.  Despite herself, he manages to draw her out a little and comes to know her some.

The movie opens with Poppington being interviewed by a psychiatrist.  He was arrested for attacking a man.  It is through flashbacks that you see why he thought he was doing the right thing.  You find out about his mother and things that she did that helped make him the way he is now.  As the movie goes on the psychiatrist starts to connect with him and discovers a person who is more boy than man, both emotionally and mentally.

I definitely recommend this movie because of the places it takes you and the things that come up that you might not expect.  In this movie Harrelson has shown a character that you can really care about – one that you do not want to see harmed, even though you can understand why his character is doing what he is doing.