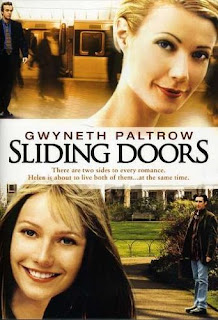 People tend to think it’s the big decisions in their lives that have the largest impact.  In reality, it’s the moment to moment things that happen that can have huge consequences.  Have you ever paused to think “What if?”  “What if I hadn’t stopped to buy a coffee and met the love of my life?”  “What if I hadn’t gotten off on the wrong track?  Would my life have turned out better?”  Well, Sliding Doors takes a look at one of those moments in the life of a young woman and shows you both outcomes.
Gwyneth Paltrow’s character arrives at her great job at a PR firm in the morning to find out that she has been fired.  She heads back to the subway to go home.  She just barely makes the train before the doors close.  On the ride home she meets a charming man (John Hannah – The Mummy movies.)  When she gets home she catches her boyfriend (John Lynch – The Secret of Roan Inish) in bed with his ex.  She breaks up with the boyfriend and starts a new romance with the man she met on the way home.
What if she hadn’t made the train, though?  What if she was delayed just a second and the sliding doors closed in her face?  This movie shows you that.  In this storyline she doesn’t make the train, so she doesn’t meet the new man.  She instead gets mugged and by the time she gets home her boyfriend is alone and is showering.  She starts working dead end jobs to support her boyfriend’s attempts to write a book, while all the time he continues to carry on an affair with his ex right under her nose.
There was a German movie that came out the same year as this that had a similar concept.  It was titled Run Lola Run.  In that movie we see three different versions of what happens when only the smallest of things change the course of the story.  The three versions are shown one after the other.  In Sliding Doors, though, they show you the two stories simultaneously.
The simultaneous unveiling of events means that the stories have a bigger impact.  When you go from one where she is in the first bloom of a new romance, to the other where she is working as a waitress while she is unaware that her boyfriend is cheating, you both appreciate the romance more, and feel more empathy for the downtrodden version of her.  They make it pretty easy to tell which of the stories you are seeing, too.  In one of them Paltrow’s character colors her hair brown early on.  I’m sure the moviemakers did this to help the viewer keep things straight.
Of course, life is not simple.  Neither of these storylines is black and white and one or both may go in directions that you are not expecting, and for the smallest of reasons.
Unless you refuse to watch any romantic comedy/dramas, I definitely recommend this movie.
Chip’s Rating: 4 out of 5 stars