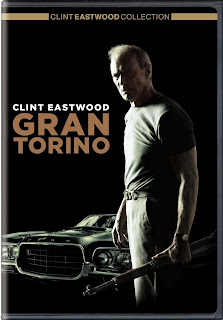 Almost 40 years after making the original Dirty Harry, Clint Eastwood came out with Gran Torino.  Unlike the sometimes cartoonish Harry Callahan, in this movie Eastwood portrays a man who is a much more realistic badass.  The character of Walt Kowalsky is a Korean War veteran, a retired autoworker who spent more than 40 years at Ford, a father and grandfather, and a recent widower after decades of marriage.  This is a terrific movie and it is one of the best films Eastwood has ever made.
The character of Walt Kowalsky is one that could be easy to hate.  At some point during the film he utters just about every racial insult you can imagine, although some are good natured ones to his friends.  He is bitter about the death of his wife.  He is disappointed in his family.  The neighborhood he lives in used to be a mostly white residential section, but has now mostly Hmong immigrants living in it, much to his dislike.  A gang runs through the neighborhood, terrorizing the residents.  Kowalsky refuses to sell the house, though, because it is the place where he and his wife spent 50 years together.  He’s still got one prize – his mint condition 1972 Ford Gran Torino.
The teenage son of the Hmong family next door is recruited by the gang.  For his initiation he has to steal Kowalsky’s Gran Torino.  He is caught and Kowalsky punishes him, although it’s more in the “teaching him a lesson” way.  A little later in the movie the gang comes back to try to lure in the son again.  This time his sister, parents, and grandparents all try to protect him.  The fight spills onto the lawn of Kowalsky next door.  The camera pans up until it is looking down the barrel of a rifle with Kowalsky looking seriously pissed behind it.  He just growls, “Get off my lawn!”  One of the gang members tries to be tough and tells him he’s crazy and he should go back in his house.  Kowalsky replies in the same pissed off voice, “Yeah?  I blow a hole in your face and then I go in the house…..and I sleep like a baby.  You can count on that.  We used to stack f*cks like you five feet high in …use ya for sandbags.”  The gang member is seriously thrown and backs down.  The gang leaves.
The next day Kowalsky finds a bunch of gifts on his porch from that family and others in the neighborhood.  He wants nothing to do with them, but they kill him with kindness.  Despite his best efforts, he is drawn in to this family and starts caring about them.  He takes the son under his wing, helps him get a job.  He sees the teenage daughter getting accosted by a couple of other punks on the streets.  He stops, gets out of his truck, and they ask him what he’s looking at.  He replies, “Ever notice how you come across somebody once in a while you shouldn’t have f*cked with?  That’s me.”  They let the girl go with him.
Needless to say, the gang that he scared off doesn’t just go away.  Some bad things happen and Kowalsky has to decide if he’s going to get involved or not.  The ending of the movie may not give people what they are expecting, but it is a much better movie for that.
I consider this to be the third best movie of all of 2008 and I highly recommend it.
Chip’s Rating: 4 out of 5 stars