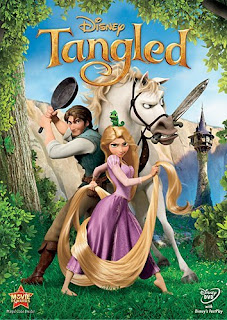 Tangled is loosely based on the story of Rapunzel.  Other than the tower and the hair, the story bears little resemblance to the fairy tale.  This is the first 3D animated movie that Disney has released.  (Pixar is owned by Disney, but releases their movies separate from them.)  While Tangled is no Pixar movie, it still has some interesting elements to it.
The plot is that Rapunzel is kidnapped from the king and queen when she is just a baby (meaning she is a princess, of course.)  The woman who kidnaps her does it because Rapunzel’s hair has magical properties that allow the woman to stay young.  She puts Rapunzel in a tower and raises her to believe that she is her mother.  She doesn’t lock her in the tower; she makes Rapunzel so afraid of the outside world that she stays.  By the way, you can easily tell the woman is evil because she has dark curly hair.  You can tell Rapunzel is good because she’s got blonde straight hair that shines beautifully.
They did a great job on the animation, with the look of Rapunzel and all the hair they had to animate.  They didn’t do such a great job with the songs.  Even though one of them is nominated for an Oscar – “I See the Light” – they are mostly forgettable.  The nominated song is sung by Mandy Moore, who voices Rapunzel, and Zachary Levi (Chuck), who voices thief, raconteur, and all-around bad boy heartthrob Flynn Rider.  The visual effect of seeing thousands of floating lanterns is actually far better than the nominated song that is being sung at the time.
I mentioned the Flynn Rider character.  He steals the crown of the missing princess.  He leaves his two partners behind to be captured by the army and finds Rapunzel’s tower.  What a coincidence, huh?  He figures it’s a great place to hide out.  After freaking out and braining him a few times with a frying pan, Rapunzel makes a deal with him.  If he guides her to where she wants to go, she’ll tell him where she hid the crown.
Rapunzel is still scared of the outside world, and she is feeling guilty for disobeying her “mother”, but she is also ecstatic to be outside for the first time.  There’s a very funny sequence where she goes bi-polar, being joyful one minute and feeling guilty the next.  I loved the way they animated Flynn Rider’s face during this sequence.  Every guy has been there and they got the expression perfect.
Speaking of funny, the one character that steals every scene he is in is Maximus.  He is the horse of the man who is the head of the kingdom’s army.  Even after all of the army has lost Flynn Rider, the horse is still trying to track him down.  For some strange reason they animate the horse acting like a dog several times.  Of course, they have the horse acting like a human, too, so I guess a dog isn’t any stranger.  The horse has a very strong sense of right and wrong and he will get Flynn Rider if it kills him.  This character is what lifted the movie into the “recommend zone” for me.  I think the horse could star in his own movie.  It wouldn’t surprise me if Disney did a direct to video movie doing just that.
The movie features something I don’t think I’ve seen before in a Disney animated movie – a death caused by a “good guy.”  Not only that, but the character was pretty much killed intentionally, too.
Some people were surprised that this movie was not nominated for a Best Animated Picture Oscar.  With only three nominees the odds were against it.  I have not seen The Illusionist, but the other two nominated movies are better than Tangled.  It wouldn’t have mattered anyway, since Toy Story 3 is pretty much a lock to get the award.
I think this movie will appeal most to tween girls because of the romance storyline between Flynn and Rapunzel, and to men with long hair fetishes because of, well, all the long hair.  The DVD and Blu-ray will be released on March 29th.  They are available for pre-order now.
Chip’s Rating: 3 out of 5 stars