August Movie Status and My Status (Why No Posts)

I’ll do the movie status first since it will be quick.  I saw only one new movie in August.  That was the film Seven Psychopaths (2012), which I reviewed as one of Steve’s Selections.  It’s also the only film review I posted in August.  I did re-watch the first season of the TV show Archer, and I caught most of Erin Brockovich on TV, which was also a re-watch for me.

Even before other events that I will get to I hadn’t really been in much of a movie watching mood for weeks.  It actually started in July.  Most of the films I saw that month were from the first half of it.  I don’t know that I watched much at all after that.  I’ve had three Netflix DVDs sitting on my coffee table, unwatched, for at least two months.  I had finished off a few lists after completing the big TSPDT list earlier in the year.  When I went to look at doing another smaller list, or any list, I just couldn’t get motivated.  It felt too much like a homework assignment instead of enjoyment.

And this bled over into posting about movies.  During this year I’ve gone from posting a few times a week to once a week the last month or so that I was doing posts.  These also felt more like homework assignments rather than the fun of sharing info on a film that I liked.

I also had three middle of the night implementations for work last week.  That completely messed up my inner clock.  And the final thing that made me less enthusiastic about using my computer to write and post reviews (or watch movies), is that about a week and a half ago I was partially hit by some ransomware.
Read more »
Posted by Chip Lary at 6:14 PM 4 comments: 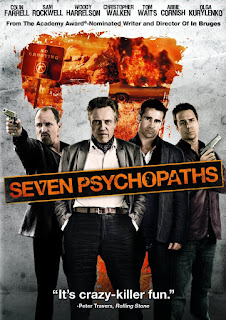 We have arrived at my August review of a movie recommended courtesy of Steve at 1001plus.  This one is a film that I was interested in when it came to DVD, but for whatever reason I never happened to get around to watching it.  When I saw it among the twelve films he gave to me I was happy because now it gave me an excuse to go back and watch it.  What I found was a film that is a cross between Charlie Kaufman’s/Spike Jonze’s Adaptation (2002) and Quentin Tarantino’s, well, pick any Tarantino movie.  While this may seem to be a strange combination it works well enough onscreen to make me like the movie.
Read more »
Posted by Chip Lary at 6:43 PM 7 comments:

Crouching Tiger Swinging Lightsabers (or, Can a Lightsaber Produce “Just a Flesh Wound”?)

I happened to run across these recently and I was amused by them.  Apparently there’s a bunch of people who use their own computer software to re-edit swordfights to turn them into lightsaber duels.  There’s a whole subset of ones from Game of Thrones.  Here were my two favorite scenes:

In my opinion this one works the best re-imagined as lightsabers.  Some I saw didn’t come across the best because of the way the original scenes were shot.  The metal swords were bouncing off objects when as lightsabers they should be cutting through them (except another lightsaber.)


And this one falls into the “of course someone had to do this scene” category.  I love the Darth Vader breathing of the Black Knight.

I’m a day late with this.  I’ve had an eventful last couple of days.

I watched 22 new movies in July, plus re-watched five others.  I didn’t work on any movie lists this last month, except only peripherally.  The one film I did from a list I watched just because I was curious to see it and it was only afterwards that I realized it was on the 101 Sci-Fi Movies You Must See Before You Die list.

Technically, I did complete the just published BBC list of the 100 best American films of all time.  It was posted on Letterboxd by someone I follow and I noticed that I had seen 99 of the 100 films.  The one I had not was The Shanghai Gesture (1941).  I was able to watch it right away so I figured “why not?” and did.

No, in July I mostly caught up on some 2014 and 2015 films I hadn’t had a chance to see yet, as well as re-watching a few more films than usual.

Here are the 22 new movies I saw in July.  Highlighted films are ones to which I would give at least three stars out of five.
Read more »
Posted by Chip Lary at 6:05 PM 8 comments: