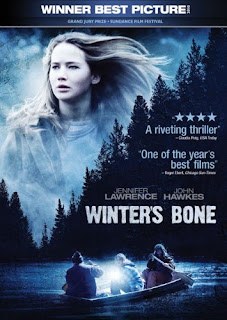 The first thing you should know is that this is not a happy, feel good kind of movie.  If you are looking for something light and fluffy, this isn’t it.  If you are looking for a serious drama with good performances, however, this movie delivers in spades.
Jennifer Lawrence plays a seventeen year old girl living with her mother, brother, and sister in the Ozarks.  Her mother has lost her mind and doesn’t communicate anymore.  Her brother and sister are younger.  Her father is out of the picture.  It is up to her to keep this family together and to keep them from starving.
does a great job as a girl who is determined, tough, smart, and sometimes too mouthy for her own good.  She deserves the Oscar nomination that she received.  At twenty years of age I believe she is the second youngest woman to ever be nominated for Best Actress.  (See my Whale Rider post for a discussion of the youngest.)  I first saw in the movie The Burning Plain (2008), playing the younger version of Charlize Theron’s character.  more than held her own with Oscar winner Theron.  I made a mental note to watch for her in future movies.
Winter’s Bone kicks into gear when the Sheriff shows up looking for her father.  He explains that the father put up the house and land for his bail bond and that if he doesn’t show up for court in a week’s time that means the government is going to take the property away from the family.  The daughter knows that there is no way that the family can survive without a house, so she sets out to track her father down.
The father was involved in cooking and dealing meth, so it’s those people that she has to talk to to try to find him.  Needless to say these are not people who want someone coming around asking them questions.  After watching this movie you can keep your mafia mobsters and your inner-city street gangs; for truly scary and dangerous people give me hillbilly meth dealers.
John Hawkes plays her uncle in the film.  It’s his character’s younger brother, his only brother, who is missing.  Even though he is her uncle, he might be just as dangerous to her as the meth dealers.  At one point in the film she says to him, “You scare me.”  He replies, “That’s because you’re a smart girl.”  He was nominated for a Best Supporting Actor award to the surprise of some.  I feel his nomination is deserved.
The film literally does not have a ray of sunshine or hint of blue sky in it.  The director deliberately shot all the day scenes with it overcast, or blew out the lighting so that the sky was a uniform gray.  It’s Winter, so the trees are mostly leafless and everything looks dead.  This was all done intentionally to add to the tone of the movie.
The movie is not 100% bleak.  Without spoiling anything there is a touch of something good happen for the daughter at one point.
The movie is available on DVD and Blu-ray, so it is easy to see.  If you are looking for a drama with some substance to it, then you should try this movie.
Chip’s Rating: 3 out of 5 stars