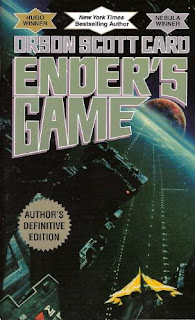 Back in 1986 I was visiting a college friend in and he had somehow ended up with two copies of the book Ender’s Game.  He gave one to me.  He had not read it yet and he figured I might get to it before he did.  After a three hour drive home, and having nothing else planned, I started reading the book around suppertime.  Even though I had to work the next day I did not put the book down until I finished reading it around two in the morning.  The next day I called my friend up and just said three words to him “Read. Ender’s. Game.”
It was less than 24 hours since he had seen me, so he was amazed that I had read it already.  He called me up a couple days later and completely agreed with me that it was a fantastic book.  We talked about it for quite a while.  Over the years I have loaned it to others and they have all enjoyed it, too.  It won every award that it was nominated for and has spawned a number of follow-on books.  I had not told a female friend that there was a second book when I loaned her Ender’s Game.  When she returned it I just handed her the second book and she literally hugged it to herself in happiness because she could read more about the character of Ender Wiggin.  I consider Ender’s Game to be one of the top five SF novels ever written.
The premise of the book is that an alien race has twice attacked Earth.  Twice humans were able to fend them off, but at great cost to the planet.  The planetary government has vowed to not let this happen again.  They started a program to breed military geniuses and to train them from the youngest of ages.  The story focuses on three siblings, Peter, Valentine, and Andrew “Ender” Wiggin.  All three of them are geniuses among geniuses.  The government thought they would have a candidate among the first two, but both of them lacked the necessary balance between being caring and being ruthless.  The government authorized the parents to try to conceive a third child, Ender, and he is the one that they take away for training.
Because of how young all the military students are, their training takes the form of computer games.  Ender faces challenges both in the school, and in being separated from his family.  As the games get more and more complex, so do his tactics for the individual battle games, as well as his strategy for the overall war game.
While all this is going on, his older siblings have been smart enough to figure out that assuming Ender is able to eventually take on and defeat this alien race, there will be a vacuum of power on Earth.  Everything will have been led by the military for so long that new leadership will be needed.  They therefore take to “the Net” writing opinions as characters Demosthenes and Locke.  They oppose each other in public, while working together in private.
While this method of communication might not seem all that special today, when this book was written in the mid 1980s there was barely connectivity between PCs.  People would dial in to boards to see what others might have put there.  There was no World Wide Web.  There were no blogs.  There were no social networking sites.  There was no tweeting.  The author describes a technique for creating an online persona and influencing public thought a couple of decades before it became prevalent.
The book has a great reveal in it.  I absolutely did not see it coming.  I had the pleasure of actually seeing a roommate reacting to the reveal as he was reading it.  His first words were “Holy shit!”  He followed that with “Oh my God.”  Then he started chuckling and said “Oh my God” one more time before going back to the reading.
As I mentioned, this book spawned a number of others.  The follow-up book is titled Speaker for the Dead and it is also highly recommended.  I can’t say the same for the others.  The more the books went on, the more it diluted things.  I have not actually read some of them, though, so it’s possible there is another gem among them.
Please do not avoid this book just because it is science fiction.  What makes it science fiction is the setting, nothing more.  The characters, their actions, and their growth are what drive the novel.  It is a book that anyone can read and enjoy.  It has 2,800 ratings on Amazon and over 2,200 of them are the highest rating of 5.  Almost 2,600 people rated it either a 4 or a 5.
I give this book my highest recommendation.  It is a must read.
Paperback                   Kindle