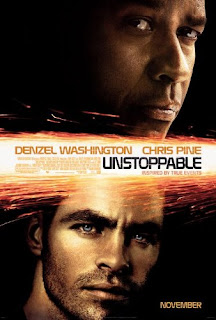 What if a train a half a mile long, including some cars that hold toxic chemicals, got loose with no engineer, no automatic brakes, and with the throttle at full power?  That is the basic idea behind Unstoppable.  It says it is “inspired by true events.”  The true events are that trains actually do get loose now and then.  Usually they are quickly stopped, but the particular incident that inspired this movie involved a train that traveled over sixty miles before they were able to stop it.
The movie stars Denzel Washington as the veteran locomotive engineer and Chris Pine (Bottle Shock, Star Trek) as the new guy.  takes Pine out for some testing and training.  They finally hook onto some cars and start to take them where they need to be.  They don’t know it, but they are headed north on the very same track where the loose train is heading south.  They are on a collision course.  It’s not like cars on a highway; trains can’t exactly swerve out of the way.
Why is the train unstoppable?  Well, it’s under full power, so it’s traveling upwards of seventy miles an hour.  You can’t just have a guy grab onto it as it goes by.  It’s carrying toxic chemicals, so if you derail it you will need to evacuate people.  Even if you have an unpopulated area to derail it in, it will cost millions of dollars in damages.  They’ve got to do something, though, because it will eventually derail itself on a sharp, elevated curve in a populated area (with a whole lot of oil holding tanks conveniently placed just below this curve for the train to land on.)
It’s not just and Pine that are in danger.  There is a train full of kids that are on a school outing.  Also, stop to think about how many road crossings there are in sixty or eighty miles of track.  Can they get all of those blocked off in time?
The movie is directed by Tony Scott (Top Gun, Domino).  His style is to have a lot of quick cut edits and quick camera pans.  It’s sometimes referred to as “Mtv style editing.”  I mention this because some people find that as annoying as I do shakycam cinematography.  I don’t mind this style, though.  I thought it added excitement to the movie.
This is an above average action movie.  It does a very good job at building tension.  In some ways this movie is like Speed; you know that the hero is going to save the day, but until then you still get caught up in the close calls and narrow escapes.  Yes, if you stop to think about things you can poke holes in the plot, but that’s not what most people watch action movies for.
This movie was nominated for Best Sound Editing.  Like sound mixing, I don’t think I’ve ever noticed sound editing in a movie.  With all the quick edits, they would have had to also do a lot of edits for sound, so that is probably why it was nominated.  I did notice that they used the sound of the train’s engines to great effect.
If you are looking for an action movie, then among the ones nominated for an Oscar this year, this is the one I liked the best.  (Among the movies not nominated, Kick-Ass is the best action movie of the year.  I will be reviewing it at a later date.)
Unstoppable is being released on DVD and Blu-ray on February 15th.  It is available for pre-order now.
Chip’s Rating: 4 out of 5 stars