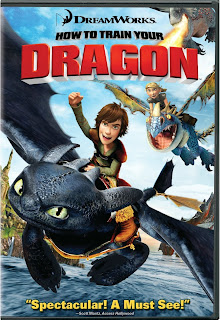 How to Train Your Dragon is the kind of movie that will probably appeal more to children than to their parents.  It’s got the boy who’s got all these great ideas, but whose father, of course, doesn’t listen to him.  It’s got parents getting into trouble and kids having to rescue them.  Pretty much all the standard clichés of a movie aimed at kids.  It’s the humor, the animation, and some action sequences that lift this movie above the same old same old and that give adults something to enjoy.
The premise of the movie is that Vikings living on an island are periodically attacked by dragons.  Everyone is trained from the time they are children on how to defend themselves from the dragons.  The main character, Hiccup, is the son of the Viking leader, Stoick the Vast (gotta love the names.)  Hiccup is a big disappointment to his father.  He is not big and burly like a Viking should be.  He isn’t doing well in the training.  Even the cute girl he likes is kicking his butt, although she’s kicking everyone else’s butt, too.  He has all these thoughts and ideas and his father just wishes he’d stop bothering him with them.
Hiccup actually builds an apparatus to capture the most elusive and dangerous kind of dragon, but his father won’t hear of it.  Hiccup uses it anyway and manages to capture a dragon, but it is injured.  He can’t bring himself to kill the dragon and ends up befriending it.  The injury is such that the dragon will never be able to fly again on its own.  While the dragon is healing Hiccup comes up with an idea of trying to rig a device for the dragon so it can fly.  In order to work it, though, he would have to ride the dragon.  This is where the title of the movie comes in.
The design of the characters is entertaining.  Stoick the Vast has this enormous beard.  Gobber the Belch (another great name) has a missing hand on one side, a missing foot on the other, and a mustache so long he puts it in braids.  There are several different kinds of dragons as well.
There are multiple flying sequences that are really well done.  They take advantage of the CGI animation and put you right behind Hiccup on the back of the dragon.
The movie is nominated for Best Animated Picture and Best Score.  It’s going to lose to Toy Story 3 in the first category.  I honestly can’t remember the score at all, so it didn’t make much of an impression on me.  I’m sure the flying sequences must have used quite a bit of music.
The movie makers did something interesting at the end that also lifts the movie above the average kid’s movie.  Without going into any detail, not everyone comes out of this movie unscathed.  There is nothing graphic, but the youngest of children may get a shock.
The humor, the character designs, and the animation lift this movie above the average.  While it is geared towards kids, adults will have enough in the movie to keep them entertained, too.  I give it an extra star for not copping out at the end.
Chip’s Rating: 4 out of 5 stars