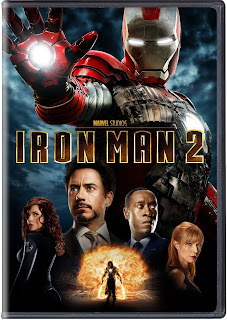 Iron Man 2 is the sequel to, you guessed it,   It does not work quite as well as Iron Man does, but then Iron Man is one of the better superhero movies ever made.
Iron Man 2 returns all the characters who survived the first movie.  They add a new villain, played by Mickey Rourke (Sin City, The Wrestler), a rival defense contractor, played by Sam Rockwell (Confessions of a Dangerous Mind, Moon), and a new character, played by Scarlett Johansson (Girl with a Pearl Earring, A Love Song for Bobby Long.)  They also re-cast the role of James Rhodes.  He is now played by Don Cheadle (Devil in a Blue Dress, Hotel Rwanda.)
After the bombshell at the end of the first movie, Tony Stark is living large.  He’s hugely popular with everyone, except for a U.S. Senator who wants him to turn over the Iron Man suit to the government for their use.  He’s got some health problems, though.  The reactor that powers his heart and the suit is slowly poisoning him and he can’t figure out a solution.  He starts taking more and more risks, like telling off a Senate hearing panel and deciding to drive in the Monaco Grand Prix at the last second.
Enter the villain, Ivan Danko.  He is the son of a man who worked closely with Tony’s father on the reactor design.  Danko has been able to build a device similar to Tony’s and he uses it to power a couple of weapons that can slice through metal.
This plot where Tony spirals downward is supposed to mimic an epic storyline in the original comic that had Tony dealing with alcoholism.  They can’t get into something with that kind of depth in this movie, though, so it never really feels like it fits with everything else.  It’s mostly used as an excuse to get into the silver Iron Man suit.
There’s an epic battle sequence at the end, with lots of flying in and around structures.  The movie was nominated for Best Visual Effects and this sequence was probably a big reason why.
You should definitely see the first movie before seeing this one.  While this one is a step down, it is also an important step forward towards the eventual Avengers movie.  Like Iron Man, Iron Man 2 also has a scene after the credits have finished, so do not turn the movie off when the credits start to roll.
Chip’s Rating: 3 out of 5 stars