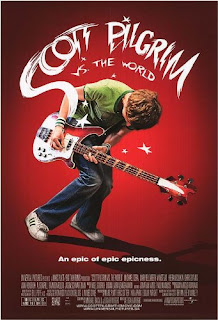 How to describe this movie?  I guess I should start by saying that it may very well be unique among the thousands of movies that I have seen.  That should tell you a lot right there.  This is not a movie for people who want to see the same, normal, grounded-in-reality, boy-meets-girl movies they have been seeing.  This is the kind of movie that you just have to go with and have a good time.  I did and I thoroughly enjoyed it.  I consider it one of the top 10 movies of 2010.
The basic premise is that a regular guy, played by Michael Cera (Juno, TV’s Arrested Development), has to defeat the seven evil exes of a new girl he likes.  The best way to describe it may be that it is a musical, except that instead of the cast stopping periodically to sing and dance, they stop to video game fight.
If the name Michael Cera is not familiar, his face probably will be.  He tends to play the geeky kid in a lot of things.  Seeing him doing some of these fight sequences might be enough to fry some people’s brains right there.
His character is also in a band and a parallel storyline is that he is trying to win a battle of the bands to get a recording contract.
The movie is an ensemble piece after Cera.  Two of the evil exes played superheroes in other movies (Chris Evans and Brandon Routh.)  I liked Alison Pill as the drummer for his band.  There's also a singer named Stephen Stills and a hanger-on named Young Neil - get the references?  Cera's got a younger sister (played by 's Anna Kendrick.)  He's dating an Asian high school girl, who's also the only groupie the band has.  [Just to toss in some extra weirdness, the actresses playing Cera's younger sister and high school girlfriend are both three years older than him in real life.] There's a snarky female character whose function seems to be to just appear and say something snarky.  There's a roommate who tells the sister everything Cera is doing and who is just as snarky.  There's an ex-girlfriend who's now in a famous band.  There's the new love interest, and as mentioned, there are the seven evil exes of the new love interest (who have actually formed a League of Evil Exes, dedicated to ensuring that no one else dates her.)
Along with all this you also get a Bollywood dance/challenge sequence, Vegan police, sleep texting, a battle of the bands that becomes an actual battle of the bands, funny text on the screen like in Zombieland, and lots and lots of Canadian coins.  Watch also for all the literal "X"s in the movie.  There is a quick Spinal Tap reference, too, when you see the Japanese twins turn the volume on their synthesizers to 11 during a band battle.

As you can surmise from all of this, the movie is a comedy.  It's based on a comic book, but I wouldn't describe this as a superhero movie.  While people do things that are not humanly possibly, it's more that they have video game powers, not super powers.

It's directed by Edgar Wright - the same guy who did Shaun of the Dead and Hot Fuzz, although none of the actors from those movies are in this one.

On a final note, the tagline for the movie is "An epic of epic epicness", which may tell you everything you need to know right there.
The movie may be best received by people in the video game generation or younger.  This doesn’t mean someone who never played video games would hate it, though.  On Rotten Tomatoes it’s got an 81% Fresh rating from movie critics, who tend to be older, and it has an 83% Fresh rating from movie audiences, who tend to be younger.  If you are looking for a change of pace, with a lot of good laughs, then I highly recommend this movie.
Chip’s Rating: 4 out of 5 stars