TV and Book – Game of Thrones 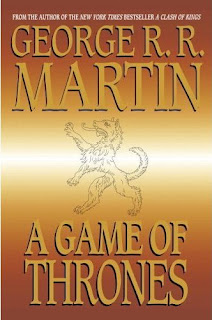 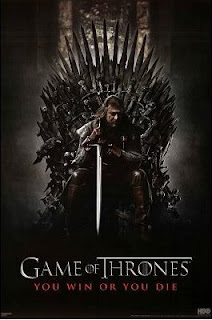 The book A Game of Thrones was first published in 1996.  It is the first book in the series titled A Song of Ice and Fire by George R.R. Martin.  In the summer of 2011 HBO adapted it into a ten episode television season by the name Game of Thrones.  The series proved to be very popular with viewers.  HBO is currently filming the second season, which will be based on the next book in the series.

I had never heard of the book prior to HBO airing the TV show.  I watched the show and was immediately taken with it.  I picked up the books in the series figuring I would read them once the show was done.  You know what they say about the best laid plans of mice and men.  They “gang aft aglay.”  After the fourth episode ended in a cliffhanger I picked up the book and started reading it so that I could find out what was going to happen.  The show follows the book pretty closely, with changes on the TV show probably done for budgetary reasons or to keep the plot from bogging down.

The show is an ensemble.  While there are faces you will recognize from other things, there is no one main character.  All of the characters are important in one way or another.  Sean Bean (The Fellowship of the Ring) is probably the most recognizable face.  Mark Addy, mostly known for comedy, does an excellent job as the King.  Peter Dinklage, a great actor (see The Station Agent) who doesn’t get a lot of good roles because of his height gets probably the meatiest role of his career.  Lena Headey (300) gets her bitch on as the Queen.  Several newcomers do very good jobs with their roles, too.  If you read the book you will see just how good a job the casting people did in finding actors and actresses to play the characters.

So what are the show and book about?  I’ve read many descriptions and none have seemed to be able to sum up things in a few paragraphs because there is so much depth to the story.  I will do my best here to condense it for you (no spoilers.)

The story falls into the Fantasy genre.  It has been inaccurately portrayed as another Lord of the Rings.  Other than both authors having the middle initials “R.R.” they do not have much in common.  Game of Thrones has much more in common with the King Arthur stories.  It is set in an imaginary land with Kings and knights.  There are hints of the supernatural here and there, but they are not front and center.  There used to be dragons, but they died off hundreds of years ago.  There are other creatures that used to be around.  A massive wall of ice was built in the far north to keep them from entering the lands of men, but no one has seen them in so long that they have become myth.  That doesn’t mean they are gone for good, though.

This land has seven kingdoms, each ruled by a Lord.  One king rules over all seven Lords.  Each kingdom used to rule itself, but several hundred years ago conquerors came to the land, bringing dragons, and they defeated all the kings.  The conqueror and his descendants ruled the land until about 18 years before the story starts.  The last king of that line was insane and was finally overthrown and killed, along with almost all of his family (the Targaryens.)  Two children managed to escape back over the sea.  There are four major Houses (families) featured in the show that are now constantly fencing with each other for the King’s favor and to gain advantage over the others.  They are the Starks, the Baratheons, the Lannisters, and the Targaryens.

King Robert Baratheon is good friends with Lord Eddard “Ned” Stark (played by Sean Bean) because Stark had helped him win the throne.  After that was done, though, Stark went back to his kingdom in the north and raised his family.  The story opens with the King having come to his friend to ask him to be the Hand of the King – essentially a chief of staff who will rule the kingdom for the day to day issues.  Ned Stark is an honorable man, too honorable for his own good, actually.  He cannot refuse his king, so he agrees to leave his home to come back with the King even though he doesn’t want to.

The Lannisters are represented by Queen Cersei (Robert’s wife), as well as two brothers, one a champion knight in the King’s Guard (who just happens to have been the one to have slain the mad king in the uprising), and the other a dwarf who is very intelligent, but who wastes himself too much in wine and women.

When Ned gets to the capitol city he finds that his friend the king pretty much does nothing in regards to ruling.  Most everything is decided by the Small Council, which is led by him.  Each of the members of the council is also jousting with each other to accomplish their own agendas.  Combine this with the plots of the various families and you’ve got quite a bit going on.  They all play “the game of thrones where you win or you die.”

Along with all of the plotting, Ned Stark is trying to find out how his predecessor died, and he is also trying to be a father to his two daughters, who he brought with him to the capitol.

Okay, that’s six paragraphs and I left out a lot from what made it onto the show.  The book goes into even more detail, of course.  Some of it is what banners each house has, what things they have done to each other in the past, and extensive descriptions of the food people eat.  George R.R. Martin is obviously a food lover.  Some people have said they got hungry while reading his books.

The biggest change from the book is that they aged all the characters up a few years.  This was probably done to prevent controversy about having young teens marry and have children.  The book is actually accurate in terms of how young people used to be when they did these things in medieval times, but they probably figured a modern audience wouldn’t know this and didn’t want to shock them.

If the TV show was a movie it would get an R rating.  It has all the elements – violence, bad language, nudity, and sex.  Some bluenoses said that there was no need for the nudity in the show, but as usual they reveal more about themselves by saying this than the show revealed about the bodies of the actors and actresses.  Off the top of my head I can think of seven or eight scenes with nudity in them (both male and female) and each scene had relevance to the plot.  Besides, it’s not like there were bras or swimsuits in the middle ages, and it’s also not like soldiers never visited whorehouses.  If you read the book you will find out that they actually toned down some of the nudity and sex.

So you want to watch the show now.  How do you do that?  Unfortunately, HBO is still operating under a dated business practice of not releasing DVDs for their shows until a year or so after they air.  They figure this will cause more people to buy subscriptions to HBO to see the show.  In reality, it just causes more people to share it with others on the internet.  I just Googled “Game of Thrones download” and got more than 8.6 million matches.  Some people are hoping that HBO will be smart and release the show in time for Christmas 2011 instead of waiting until summer of 2012.  I will have links for the show’s sets below, but as of this writing there are no announced release dates for them.

One other thing about the show: pay attention to the opening credits.  They do a great job of showing where the various locations are relative to each other.  They sometimes change the credits from week to week to reflect new locations on the map.  They also work in the symbols for the four major houses shown in the series - Direwolf for Stark, Stag for Baratheon, Lion for Lannister, and Dragon for Targaryen.  The actors’ and actresses’ names also have a symbol beside them that corresponds to the house of the character they are playing.

I give the show my highest recommendation.  The book is recommended as well.  If you like it there are currently four more books available in the series.