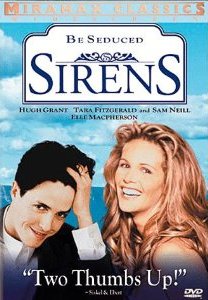 The movie Sirens features early roles for Hugh Grant and Tara Fitzgerald.  They would re-team two years later for The Englishman Who Went up a Hill But Came Down a Mountain.  In Sirens it is much more Fitzgerald who gets to be sexy rather than Grant.
He plays a young reverend that has come to with his wife (Fitzgerald) in the 1930s.  He is asked to visit an artist (Sam Neill) who has painted a scene that the church considers blasphemous.  The reverend is to convince the artist to withdraw the painting.  He thinks this will be easy.
When he arrives at the home of the artist, though, he finds that he is very much out of his element.  The artist has three models living with him that he paints.  They pose semi-nude for him and are not the least bit ashamed by it.  The reverend has never experienced anything like this and doesn’t know how to even act around these women.  He ends up having to stay far longer than he expected because he cannot convince the artist that what he has done is wrong.
The three models, played by Elle MacPherson, Portia de Rossi, and Kate Fisher, are the sirens of the title.  It is not the reverend they lead astray, though, but his wife.  No, she doesn’t end up figuring out she is a lesbian.  She does, however, begin to question the restrictions that 1930’s society puts on a woman in general and a reverend’s wife in particular.  She is very repressed and in some ways she envies the freedom that these women possess.
I will freely admit that I originally rented this movie way back when because I had heard that Sports Illustrated swimsuit model Elle MacPherson played a nude model in it.  She committed to the role by not causing grief for the director about the nudity, and also by gaining more than twenty pounds so that she would appear realistic for a model of that time period.  Portia de Rossi also looks healthy in this movie.  It was only later when she was on Ally McBeal that she starved herself into being a twig.  She’s probably best known now as being Mrs. Ellen Degeneres.
With the beautiful women walking around, sometimes unclothed, it turns out that the sexiest scenes in the movie feature the reverend’s wife, and she is fully clothed.
There is one other person staying with the artist.  He is a handsome young man who is unfortunately blind.  He helps out with tasks around the house.  The three models scandalize the wife by swimming naked in front of the man, but they point out that he cannot see them, so why does it matter?  They can see that the wife is attracted to the man, so they decide to have some fun with her.  They tie her hands behind a tree, trapping her near the man.  They then run off giggling to watch what happens.
The young man has heard something so he comes out to investigate.  When he gets near the wife she asks him if he can help her get her hands free.  He reaches over until he finally finds where she is.  His hands lightly touch her face, move down to her neck, shoulders, arms, then finally behind her so that he can untie her.  She would not have been able to stop him if he were to do anything improper, and the light touches he has already made have been enough to make her feel things she shouldn’t feel.
Later in the movie the wife finds herself alone with the man.  He reaches for her face and begins to runs his fingers over it again.  The camera pans down to her hands.  She slowly takes them and holds them crossed behind her back, as if they are tied.  She is now “helpless” to stop this man from lightly caressing her.
By the way, there is a short scene near the end of the movie where something important is revealed about the young man.  It is only a second or so and some people miss it.
If you would like to see an early role from Hugh Grant, or to see a movie about what life was like for a woman in the 1930s then give this movie a try.  If you want to see beautiful women (and a man) nude then you will definitely want to see this movie.
Chip’s Rating: 3 out of 5 stars