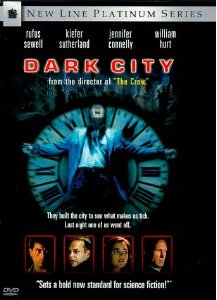 could at first be described as “SF noir”.  Digging a little deeper it becomes far more than that.  It was director Alex Proyas’ follow-up to The Crow (1994) and it displays some of the same tone and mood.  This is not your mainstream science fiction movie, but it does display some themes and images that would explode into the public consciousness when The Matrix also used them the next year.
A man (Rufus Sewell) wakes up in a dirty apartment with no memory of who he is or how he got there.  He finds a murder victim and he has blood on himself.  It looks like he’s killed someone.  The phone rings.  A man on the other end (Kiefer Sutherland) warns him that he has to get out of the apartment immediately because some strange men are going to show up soon looking for him.  He manages to get away, but finds out that a police Inspector (William Hurt) is trying to find him for some other murders he knows nothing about.
He slowly pieces some things together.  His name is John Murdoch.  He finds out his wife (Jennifer Connelly) is a torch singer in a night club.  Connelly doesn’t do her own singing, but the illusion of her singing Sway with Me is a great one.  Eventually he runs into the man on the phone.  He is a doctor who assists these Strangers.  Assists them in what, you ask?  Murdoch witnesses nothing less than the structure of the city being rearranged and people being given whole new identities.  How are these Strangers doing it and more important, why are they doing it?  Those are the questions he tries to find answers to, along with still trying to find out more about who he really is.
Two of the Strangers are played by Richard O’Brien (The Rocky Horror Picture Show) and Bruce Spence, who will always be the Gyro Captain from The Road Warrior to me.
I mentioned “noir” at the beginning of this post.  It always seems to be night in the city (hence the title.)  The time period sometimes looks like the 1940s, either from the music or the clothes, but there are hints that it is not the 1940s, too.  There are multiple mysteries that need to be solved.  The man who’s caught up in it all seems to be getting led astray by others and needs to find his own way through to the end.
I saw this back when it came out on DVD.  There were several deleted scenes on the disk.  There has since been a Director’s Cut of the movie released that re-incorporates these deleted scenes into the movie.  I have never seen the Director’s Cut, but I watched all the deleted scenes on the DVD, so I know what happens in them.  Watch either version.
This is a movie for people who want to see some concepts they don’t normally see in movies, who want to see some mind-bending visuals, and who want to see a good science fiction movie.  It is highly recommended.
Chip’s Rating: 4 out of 5 stars