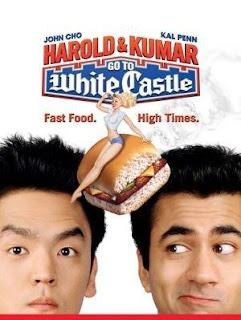 Back in 2004 if you would have told most people that an R-rated comedy starring two relatively unknown minority actors would be one of the funniest movies to come along in quite awhile, they would have laughed as hard as audiences did at this movie.  When I saw Harold & Kumar Go to I laughed harder than I had in years.
The movie stars John Cho as Harold and Kal Penn as Kumar.  Cho was probably best known from small roles in the first three American Pie movies and Penn was probably best known for a supporting role in Van Wilder.  After the success of this movie and its sequel [see my review of that here] , Cho is now playing Lt. Sulu in the Star Trek reboot and Penn spent a couple of years on the TV show House before taking a position in Obama’s government.  He has now relinquished that post to film the third Harold & Kumar movie that is due out late in 2011.
In addition to launching these two actors, this movie also cemented the comedy career of Neil Patrick Harris.  In the movie he plays “Neil Patrick Harris”, former star of Doogie Howser, M.D. and sex hound who likes to snort coke off whores’ asses.  Needless to say, this is not intended to be an accurate portrayal.
The premise of the movie is a story about “the other guys.”  Many comedies or road pictures would show a couple guys dumping their work to head out for the weekend to party hard.  Well what about the guys who get the work dumped on them?  What’s their story?
The movie starts out in typical fashion with Ethan Embry and Robert Tinkler playing the white guys who are going to go party.  They’ve got work to do, but they dump it on the nerdy Asian guy – Harold.  He takes it home for the weekend where his roommate – Kumar – convinces him to smoke some pot first to unwind.  This leads to the number one stereotype – the munchies.  Harold and Kumar decide to go to to get some burgers.  What follows is a seemingly insurmountable set of distractions and roadblocks.
Parallel to this story, which we see, and the story of the white guys, which we do not see, we also get glimpses of a third story.  “The Jewish guys”, played by Eddie Kaye Thomas and David Krumholtz have also gotten high and have decided to go to Hot Dog Heaven.  They cross paths with Harold and Kumar a couple of times.  The filmmakers said that they want to go back sometime and film those two guy’s story, too.
At one point in the movie Harold and Kumar find themselves on a back road in the middle of nowhere.  They stop to pick up a hitchhiker – and it’s Neil Patrick Harris.  It blows their (already stoned) minds.  Harris proceeds to try to convince them to find some chicks since “it’s a total sausage fest” in the car.  (Note – this was before Harris publicly announced that he was gay, but his characterization is still way beyond anything you’d expect.)
Harris basically steals every scene he’s in, including a scene where he literally steals Harold and Kumar’s car.  After this movie came out it got him a part as an unapologetic womanizer on the TV show How I Met Your Mother, which has aired for the last six seasons.
There are also appearances by Paula Garces, Ryan Reynolds, Jamie Kennedy, Malin Akerman, and an unrecognizable Christopher Meloni.
There are rated and unrated versions of the movie available on DVD.  The unrated version sold far more copies and it is the version I saw.  There’s only about a minute’s difference between the two versions.  There’s plenty in the theatrical version to earn an R rating and there’s nothing in the unrated version that would push it beyond that.  See either one you like.
Unless you hate R-rated comedies then this movie is highly (no pun intended) recommended.
Chip’s Rating: 4 out of 5 stars