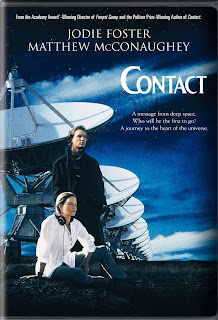 Few movies treat science with respect.  Usually there is the person who is trying to use it to abuse power (the mad scientist), or it is pseudoscience at best.  Just as few movies treat faith with respect.  Most people of faith in movies are played as naïve, as nuts, or as extremists.  Contact actually treats both with respect, and shows that they don’t have to be bitter enemies of each other.  This is one of the reasons that Contact is the best movie of 1997; yes, even better than Best Picture winner Titanic.
Contact was directed by Robert Zemeckis (Back to the Future, Who Framed Roger Rabbit), fresh off his triumph with Forrest Gump.  It was based on a novel by Carl Sagan, who sadly did not live to the release of the movie.  He did get to see an early cut of it, though.
The movie opens with a young Ellie Arroway (Jena Malone in an early role) and her father (David Morse) bonding over a ham radio.  He has taught her how to work it and the fact that she can contact people hundreds of miles away fascinates her.  Unfortunately, she suffers a tragedy that will be a defining moment in her life.
The movie skips ahead 15-20 years and she is a scientist (now played by Jodie Foster) working for SETI (the Search for Extra-Terrestrial Intelligence) at a radio telescope in .  She has found the biggest “ham radio” there is and she is scanning the universe for any radio signals that could be coming from an intelligent source.  She is a brilliant scientist.
She meets Palmer Joss, a handsome man she is immediately attracted to.  She is disappointed that he turns out to be religious.  As he says, he was studying to be a priest, but couldn’t deal with the celibacy requirement.  “You can call me a man of the cloth….without the cloth” might be my favorite line of the movie.  Just to show you how changes even the most serious of stories, in the book this character is in his 40s and overweight.  In the movie he is played by Matthew McConaughey.
Ellie and Joss debate science vs. faith.  She is a pure scientist.  She trusts what she can see, taste, feel, etc.  She has no room for faith.  Joss accepts that science explains much, but says that it cannot explain everything.  A great point about Occam's Razor comes up.  It is used by scientists to guide their theories, although it is not a scientific proof.  Yes, it does come back later in the movie.
The movie skips ahead several more years.  Through a rich patron, Ellie is now at a radio telescope array in .  She is listening to a specific frequency one evening and finally hears what has to be a real signal.  The scene of her discovery, her excitement, and the momentary thought that the signal has been lost are terrific.  The discovery of this signal sets the whole world on its ear.
The President (played by Bill Clinton using actual news conference clips) calls in advisors, which include Ellie’s old boss (Tom Skerrit) and Palmer Joss.  Even though she discovered it, she is being marginalized.  She returns home to find someone has broken in and left her a computer set up to communicate.  She does.  She gets invited to a specific geographic location.  It turns out to be the plane of the rich patron who has been financing her research.  His name is S.R. Haddon (John Hurt), billionaire owner of Haddon Industries.  He has figured out the key to the signal and gets her back into the game.
This leads to a global agreement to build a device that is shown in the plans from the translated signal.  The device appears to be able to somehow transport a person, perhaps across the galaxy to meet the people who sent the signal.
Ellie becomes one of the candidates to go, but so does her former boss.  At hearings to determine the candidate she is asked a question by Palmer Joss – Do you believe in God?  She doesn’t.  As another person points out, a significant portion of the planet believes in a higher power and someone who represents all of humanity should share that belief.  She won’t compromise science no matter how much it would be to her advantage.  Even though she answers the question diplomatically, that dooms her chances.
Her former boss immediately uses this to his advantage, claiming a strong religious belief that he does not have.  He tells her afterwards that he does feel bad because she had to learn that the world is not a fair place.  She counters that she thought the world was what we make of it.
Needless to say, not everything goes as planned.  There are a couple of great moments that follow all of this.  Without going into detail, at a certain point Ellie is faced with the fact that she has had an experience that in every way, shape, and form, relies on faith to be believed.  She doesn’t compromise her scientific principles, though.
At its heart this movie is literally about contact in all its forms.  It is the contact of people on ham radios, of a father and daughter, of a scientist and a man of faith, of a man and a woman, and even of humans and another race.  It works on all levels.  I give it my highest recommendation.
Chip’s Rating: 5 out of 5 stars