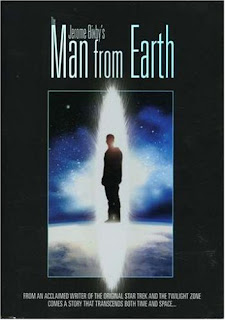 This movie is also known as Jerome Bixby’s The Man from Earth.  Bixby was a talented science fiction writer.  Among other credits, he wrote the classic Twilight Zone episode “It’s a Good Life”, as well as several episodes of Star Trek.  While he lay dying he wrote his last and perhaps his greatest story – The Man from Earth.
The premise - a professor who is moving on is thrown an impromptu party by some colleagues.  They press him for why he is leaving.  At first he resists, but then finally starts to tell them a tale about a man who has lived for 14,000 years - himself.

What follows is him discussing this with his colleagues.  What you'd ask is what they ask.  How can this be true?  Prove it, but how?  What do you remember?  Did you meet anyone famous?  Is he lying?  Is he crazy?  What would be the perspective on history that someone like this would have? etc. etc.


There are no aliens, spaceships, rayguns, or actually any special effects at all.  What it does have is plot, ideas, and a very interesting character.  Like most good Science Fiction it holds a mirror up to humans and makes us look at ourselves as others would see us.
As you can probably tell from the description above, if you want action then this is not the movie for you.  It's all about the story.

Among other things this movie discusses theology and religion.  What would be the beliefs of a man this old?  Does he have any beliefs?  If so, what are they?  Christianity gets discussed a lot, and from a unique perspective.  If you are a strong believer you may be disturbed by the way some things are presented.  One of the characters in the film certainly is disturbed.

The Man from Earth is a low-budget, independent film.  There are no stars in it, although there are a number of character actors you may recognize.  Tony Todd is probably the best known among the cast.  He steps away from the horror movies he is frequently in and gets to play a learned anthropologist in this movie.
It was shot on a low budget because the big studios wanted to turn this into a completely different kind of movie.  Jerome Bixby’s son Emerson promised his father he would get his last story made.  It bounced around for years in development.  At one point some studio people wanted to show the main character in flashback riding a wooly mammoth into battle.  Emerson Bixby protested that the whole point of most of the movie is whether the man is telling the truth or not.  Including a scene like that would kill the ambiguity that makes the movie better.  It would also look really silly.  Thankfully, the big studio deal fell through and Emerson Bixby bought back the rights to his father’s story and managed to get it made himself.  (Those other folks went on to make the movie 10,000 B.C.  If you haven’t seen it, count yourself lucky.)
The only change Emerson made to his father’s story is adding a scene with a gun.  I can remember watching the movie the first time and feeling that this scene didn’t fit with the rest of the movie.  I found out afterwards that it was the one scene not in the original script and it was added to try to put a little more tension into the film.  They should have left the story as it was.  This is only a minor quibble for me.
This movie touches on all the clichés of an immortal being and proceeds to refute them.  For example: A person like this would not be a super genius.  He wouldn’t be able to remember anything more than a normal person.  One of his colleagues challenges him, “Where were you in 1237?”  He counters, “Where were you on March 10th, 1984?”  His point is that memories fade.  Or – he could be lying about being that old.  This is not a question that can determine if he is for real or not.
What would you ask someone claiming to be this old in order to know if they are telling the truth or not?  It’s not as easy as you might think.  Perhaps you would ask him to speak in an ancient language. He could say he no longer remembers any, or he could start reciting something unintelligible.  If it is the latter how could you tell if he was really speaking a language or just making up random sounds?
This is the kind of movie that will make you think.  I loaned it to a friend and he watched it with his teenage son.  He said that the two of them spent 45 minutes discussing it after the movie got over, not because it was hard to understand, but because of all the great questions it brings up.
I actually watched this movie twice in the same day the first time I rented it.  I’ve watched it a couple times since then with others, and I will likely take it down off the shelf again after I get this set of reviews posted.
Unless you have to have action in your movies, then this is a must see.  I give it my highest recommendation.
Chip’s Rating: 5 out of 5 stars