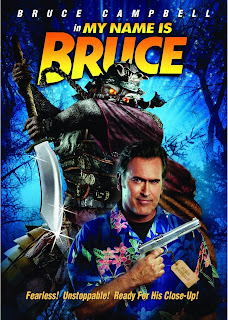 The title of this movie refers to Bruce Campbell, star of many B movies, including the Evil Dead trilogy.  [You can read my review of his best movie here.]  In My Name is Bruce he gets mistaken for his Evil Dead character of Ash by a town that needs help fighting off a demon.  Both carnage and hilarity ensue.

In the movie is a bottom of the barrel actor, living in an old mobile home, and subscribing to the sleaziest magazines you can imagine.  His agent keeps getting him parts in sequels to Cave Alien, a Z grade movie.  The latest one is going to be shot in .  His agent is having an affair with ’s estranged wife, so he wants to get him as far away as possible.

In the meantime a town in the Pacific Northwest is having a problem with a real demon.  One of the people there figures they need to get the guy from The Evil Dead movie to come in and get rid of the demon for them.  They show up at ’s door and tell him what’s going on.  They keep referring to him as Ash.

He thinks they are just a couple of fanboys who are really in character.  Like the fictional actors in Galaxy Quest, he goes along with them thinking it’s just a fan convention.  When he gets there he plays along and even confronts the demon, which he thinks is a guy in a costume.  When things go badly he realizes that this is all real and he wants nothing to do with it.  Can the townspeople, including one very pretty one (Grace Thorsen) convince him to “man up” and help save them?

As you can tell, this isn’t how Bruce Campbell really lives.  In fact, he shot much of the film on a backlot he had built on his own property.  You can tell he is having fun playing a low rent version of himself.

Bruce Campbell has many diehard fans.  There are a ton of references and jokes in this movie for them.  In fact, this movie will probably be most enjoyed by those very same people.  If you know nothing about Bruce Campbell at all, you can still follow what is going on in the movie; you just won’t get some of the humor.

If you are a Bruce Campbell fan then you will definitely want to see this movie.  If you do not know him then you may want to check this film out.  You may end up being amused by it.  I have seen a few of his movies and I thought this movie was funny enough to recommend.