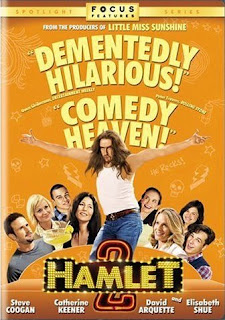 First, the movie Hamlet 2 is not a sequel to Shakespeare’s play Hamlet.  Hamlet 2 is a play within the movie that a high school drama teacher is trying to put on to save the drama club at his school.  Think of this movie as a combination of the TV show Glee and a spoof of inspirational teacher movies.  The play Hamlet 2 can probably give Springtime for Hitler a run for its money as worst idea for a play ever.
Steve Coogan (Tropic Thunder, Night at the Museum) plays an out of work actor who has to take a job as a high school drama teacher in .  His wife, played by Catherine Keener, wants to have a child, so he needs the job to be able to afford a family.  They take in a border, played by David Arquette, in order to make more money.
In the midst of all this the school cancels the drama program.  Coogan’s character decides that the only way he can save it is to put on a play that he will write and star in, and that will use the student talents of the misfits and lowlifes that he has been assigned.  He names the play Hamlet 2 and it includes, among other characters, Jesus, who is brought to via time machine.  Jesus is very popular in , so this is, of course, where the big musical number “Rock Me Sexy Jesus” is performed.
Needless to say, when the people in the community find out about this play they are offended by the concept.  They bring legal action to stop the school from performing the play.  Can the teacher and his misfit students rally together and still put on the play and save the drama program (and with it the teacher’s job)?  Helping them in this endeavor is Amy Poehler, who plays a very abrasive ACLU lawyer.
You might be wondering where the Pretending to Play Themselves part comes in.  At one point Coogan’s character gets injured and is taken to the hospital.  When he wakes up he first thinks his nurse is Elisabeth Shue, since she looks so much like her.  It turns out she really is Elisabeth Shue.  She got sick of all the backstabbing in and decided to change to a more positive career – nursing.  Needless to say, Coogan’s character tries to enlist her help in putting on the play, but she’s afraid that if she gets back on stage it will make her want to go back to Hollywood.  Obviously, Elisabeth Shue never dropped out of acting to become a nurse, so this is just another one of the running jokes in the movie.
If you like comedies at all then give this movie a try.  It may pleasantly surprise you.
Chip’s Rating: 3 out of 5 stars