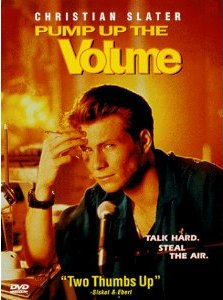 Pump Up the Volume is one of those semi-forgotten movies.  It stars Christian Slater, who’s earlier movie Heathers overshadows this one.  In fact, this movie pretty much is Christian Slater.  He is in almost every scene and he gets to play two very different personalities.  I’m here to remind people of this movie and to let you know why I feel it should not be forgotten.
Slater plays Mark Hunter, a teenager whose father has just moved to a new town to become the Superintendent of the school district.  Mark is extremely shy and talks to almost no one in his new school.  He has a secret, though.  He is also pirate radio DJ Hard Harry who broadcasts in the evenings, not knowing if anyone is listening to him and his music, but doing it anyway (not unlike the many people who do blogs.)
His rants have attracted a small following among the other teenagers in his town.  He is speaking both to them and for them.  He gets them and they idolize him for it.  He also plays great music that they can’t hear on the regular radio stations.  In fact, this movie has a great soundtrack.  It includes Leonard Cohen, The Pixies, Ice-T, Beastie Boys, Cowboy Junkies, Sonic Youth, Soundgarden, and many others.  I will include a link for the soundtrack at the bottom of the post.
He receives mail from some listeners and he responds to the letters over the air.  One listener is a sexy lady who always writes to him on the same red paper, but she will never leave a number or address where he can contact her on the air.  This girl, named Nora, is played by Samantha Mathis in an early role.  She has a secret of her own: she is determined to figure out who Hard Harry is.  She has been writing down clues that he has mentioned on the air, such as where he eats lunch or what kind of gum he chews.  She figures out Mark’s secret.
Mark is completely thrown by this.  He can barely speak to anyone face to face, let alone a girl, let alone a girl who knows he is also a pirate DJ and that has been sending him sexy letters on red paper.
She confronts him at his home and they spark some chemistry.  He talks to her via the radio, not making eye contact with her.  Suddenly, his parents interrupt.  They are delighted to find him with a girl because they thought for a minute he might be that pirate DJ that is starting to cause problems at the school.
After they leave Mark and Nora have a very sexy scene.  Mark puts on the song Why Can’t I Fall in Love by Ivan Neville.  He walks to where Nora is.  He is already bare-chested because she broke in on him while he was broadcasting in his own room.  They start to circle each other, moving a little to the music.  She takes of her shirt, too.  If you can take your eyes off their chests watch Mathis’ face and mouth in this scene.  As the two get closer and closer to a kiss, circling and circling to the music, she keeps moving her mouth and tongue in ways that show how much she is anticipating the kiss.  Finally their mouths meet as the music rises to a crescendo, which is quickly cut off as a police siren sounds nearby and they duck down out of sight.
I have to say that this scene made me a Samantha Mathis fan.  She has the most kissable mouth I have ever seen on a woman.
The two ducked down because the police are now searching for Hard Harry.  The school district has been having more and more trouble with students.  Finally, people start re-broadcasting his shows over state lines and the FCC gets involved.  If he goes on the air again they will be able to triangulate his broadcast signal and figure out where he is.  He has tons of teenagers counting on him to not let them down, though.  Will he make a stand for them?
I’ve met some people who hate this movie.  I saw it when it came out in the theater and when I was young enough to still remember what it was like to be a teenager and to have so much anger with parents and schools that just didn’t understand.  I identified with the lead character, and I loved the music in the film.
My biggest complaint with the movie is that all of the adults, except for the one played by Ellen Greene, are one-dimensional.  Of course, the reverse is usually true of the way teenagers are portrayed in most movies, so perhaps this is only fair in a movie that is designed to be for and about teens.
Like Slater’s other movie Heathers, this is a movie for teens that could never get made today.  It has bad language, nudity, and a message that teens should fight the system that schools and their parents want to fit them into.
If you are a teenager, can still remember what it was like to be a teenager, or if you like great music, then you should check this movie out.  If you are an uptight adult who has teenagers of his or her own then you may want to skip this movie.  Other than that, it is highly recommended.
Chip’s Rating: 4 out of 5 stars