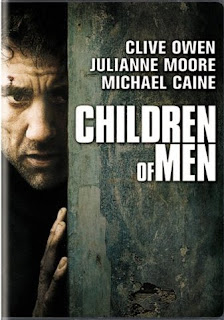 Children of Men is science fiction for adults, meaning it is intelligent, moving, and actually about something.  It came out very late in 2006 and received three Oscar nominations, including one for Best Adapted Screenplay.  It is based on the P.D. James novel The Children of Men.  The other two nominations were for Best Cinematography and Best Editing, so don’t think it is a snorefest.  The movie literally starts with a bang and puts you in the middle of the action when it happens.
The movie takes place in in 2027.  No child has been born for the last 18 years and society has gone downhill.  Clive Owen plays a man who is just going through the motions of living until one day a woman from his past (Julianne Moore) catches up with him and asks him to take on a task for her.  The movie takes off from there.

To say more would be spoilers, but I will tell you that the movie is NOT about finding out why no babies have been able to be born.  You don't know how many messages I read on IMDB that went something like, "this movie sux! u nvr find out why theres no babees!"  Well, that's not what the movie's about.  What's important is not why, but that it simply is the way things are.  It is what drives the events of the movie and what makes the people in the movie do the things they do.

One warning - if you feel that the near future will be filled with peace, love, and understanding then this is not the movie for you.  It gets its R rating from the violence that goes on in a society that is breaking down.

I will also say that this movie probably has the best "you are there" cinematography that I have ever seen.  What I mean is that there are several scenes on city streets, and a memorable one in a car, where you are literally right there beside the characters, experiencing the danger that they are.  There is a feature on the disk that shows how they shot the car scene.  It’s pretty complex.

The best scene, though, is a quiet little one in a barn.  And of course it was spoiled for me by simply reading the brief description of the movie on the DVD case and on Netflix.  So much for not ruining that moment for the viewer - thanks marketing guys.  I have deliberately not described it here, so you won't have the same spoiler I did.  There is another terrific scene late in the movie where everything goes quiet in a war zone.  You’ll know which one I mean when you see the movie.

Bonus points to anyone who gets the floating pig balloon reference.  You probably have to be at least my age to get it, though.  It has nothing to do with the plot of the movie - it's just a fun image that appears early on.
This is a very emotional movie and a very intelligent movie.  Mix in direction from Alfonso Cuaron, some fine supporting acting from Michael Caine and Chiwetel Ejiofor, and the intense cinematography, and you’ve got a truly great film.  I give it my highest recommendation.
Chip’s Rating: 5 out of 5 stars