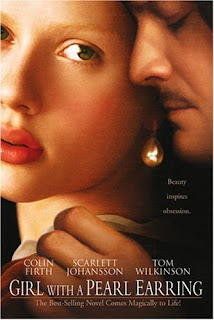 Girl with a Pearl Earring came out the same year as Scarlett Johansson’s movie Lost in Translation.  While the latter is much better known she ended up getting Golden Globe Best Actress nominations for both.  I consider her performance in Girl with a Pearl Earring not only better than her performance in Lost in Translation, but also better than any other performance in her career.
This movie is based on a book that told a fictional account of how 17th century painter Johannes Vermeer came to create his famous painting Girl with a Pearl Earring.  Like the Mona Lisa no one actually knows who the woman or girl is in the painting.  Some have speculated that the model might have been a maid in Vermeer’s home, and so author Tracy Chevalier was inspired to write her novel.
Colin Firth plays Vermeer.  (Note - his 2007 movie St. Trinian’s has several funny references to this movie.)  Johansson plays Griet, a young woman who has just arrived in Vermeer’s household to be a maid.  Tom Wilkinson plays Vermeer’s patron (the man who buys his paintings.)  Cillian Murphy plays the son of a butcher, who becomes a love interest for Griet.  Look also for an early appearance by Anna Popplewell (The Chronicles of Narnia) in a small role.
Griet has a tough time in the house.  Vermeer’s daughter is a little brat who hates her.  Griet’s mother warned her to not be led astray by the false religion in the house.  She must also keep her head covered at all times.  Vermeer’s wife is at first distant to her, then later hostile as she begins to suspect that her husband might be spending too much time with her.  Her only friend is Vermeer himself, and to a lesser extent Vermeer’s mother.
She starts to settle in a little, though.  She does a good job getting proper food in the marketplace.  She spars with a butcher over a good cut of meat and this is how she comes to meet Murphy’s character.  They start courting when she gets a free day.
Wilkinson’s character becomes infatuated with Griet and he demands that Vermeer paint a picture of her.  She does not want to pose for several reasons.  First, it would not be proper.  Second, she knows she would lose her job if Vermeer’s wife ever found out.  Third, she doesn’t like Wilkinson’s character at all and knows why he wants a painting of her.
She has come to appreciate not just the art that Vermeer creates, but the man himself.  She is not in love with him, but she doesn’t want to see harm come to him, either.  She finally agrees to pose for him, but she refuses to uncover her head.  This frustrates Vermeer, who has a particular image in mind.  They compromise on a head wrap that will leave her ears and neck free.  While she is changing her head covering, Vermeer catches a glimpse of her with her hair gloriously uncovered.  He is definitely struck by her beauty, and she realizes he sees her, but after a few seconds he turns away.
She returns with her head wrapped and her ear free, but the image still is not right.  Vermeer finally decides that one of his wife’s pearl earrings is what is needed to complete the image.  This will require getting them away from his wife while he paints and then returning them without her knowing.
They get them, but there is one last problem – Griet does not have pierced ears.  She has come this far, though, so she agrees to do this for Vermeer.  What follows is a great metaphor.  She has already been “seduced” and “uncovered” by Vermeer.  She now lets him pierce her ear.  He pushes a sharp needle through, drawing a little blood, while she lets out a little sound of pain.  He gently wipes away the blood and comforts Griet, realizing what she has given up for him.  She then has to remain still while he gazes at her partially uncovered head, and her pierced ear, so he can paint.  Finally, all of this must remain hidden from his wife.  When he is done, she seeks out the butcher’s son and releases all the pent up passion that has been created in her by doing these forbidden things for the sake of art.
Needless to say all of this causes the situation in the household to come to a head, but Griet has grown up quite a bit and has learned much about life.
I loaned this movie to a friend and he said he felt that Johansson spent most of the movie just making different facial expressions.  I watched it again and realized that the director quite often would have someone say something to her, or do something around her, and they would then cut to her face to show her reaction.  Part of it is that a maid at that time was supposed to be apart from the family and that she was supposed to only speak when spoken to.  I thought her performance was appropriate for the time and as I said at the top of this post, I feel it is the best of her career so far.
Unless you hate period films this movie is highly recommended.
Chip’s Rating: 4 out of 5 stars