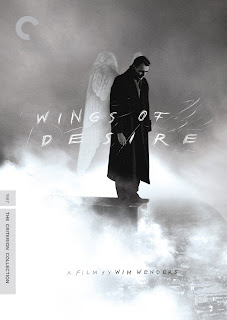 Wings of Desire is a German film that was shot just before the fall of the Berlin Wall.  It touched a nerve first with its German audience, then around the rest of the world.  Some of the impact of this film has probably been lost for people who have only known a world where the wall does not exist.  It is still a movie well worth seeing, though.
Bruno Ganz (Downfall) stars as Damiel, an angel that watches over people, helping them emotionally get through the rougher times in their lives.  His closest companion is Cassiel and they spend their days helping people, listening to their thoughts, and talking about what it means to be human.  One day he sees beautiful trapeze artist Marion and is enchanted with her.  He can’t be with her, though, because he is an insubstantial angel.
Damiel and Cassiel pass back and forth through the Berlin Wall on their journeys among people.  This is what I meant earlier about the impact it had on the German audiences of the day.  The Berlin Wall had been an impassable barrier for normal people for more than 40 years when this movie was made.
Damiel finally decides to become human, to experience everything that they do.  He “falls to Earth”, but does so on the Communist side of the Berlin Wall.  Cassiel quickly realizes what is happening and gets his friend to the free side of the wall.  This also would have caused a lot of suspense for audiences of the time.
Peter Falk appears in the movie as “The Filmstar.”  Just after becoming human Damiel wanders near the set of a movie that Falk is shooting in .  He is not just Peter Falk, though; he used to be an angel himself.  Many years ago Falk made the same choice Damiel did.  He helps Damiel with some of his first experiences as a human.
If this plot sounds familiar, it is probably because you saw the American remake City of that starred Nicholas Cage and Meg Ryan.  Please don’t skip Wings of Desire because you’ve seen the remake.  For one thing, Wings of Desire is a much better movie.  For another, City of is one of the few American remakes that has an unhappier ending than the original foreign film.  Usually it is the other way around.  Damiel has a much better experience as a human in Wings of Desire than Nicholas Cage’s character did in City of .
The film is directed by Wim Wenders.  He does some interesting things with the cinematography in the film.  Among them are several shots of statues with wings that appear to be part of the angels.  In addition, the film is in black and white when you are seeing things from the angels’ perspective and in full color when you are seeing things from a human’s perspective.  This also illustrates how the angels cannot experience what humans can.
There are many other things about this film that are quite interesting and moving.  I don’t really have the words to adequately convey them here.  Attempting to describe them would result in them not sounding that important.
I highly recommend this movie, even if you have seen the remake.  In fact, if you have seen the remake you owe it to yourself to see the much superior original film.
Chip’s Rating: 4 out of 5 stars