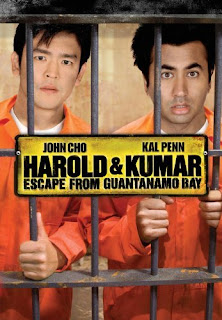 Harold & Kumar Escape from is the sequel to the very funny Harold & Kumar Go to .  [See my review of that here.]  This is one comedy sequel that is almost as funny as the first movie, and that’s saying something.  While I would consider the first one to be the better of the two, the second is definitely a worthy follow-up.
This time around Harold, a Korean-American, and Kumar, an Indian-American, are going to fly to to surprise Harold’s girlfriend and to sample the pot in the cafes there.  After the plane takes off Kumar goes to the bathroom to “light up his bong.”  An old lady overhears him and thinks he said something about “lighting a bomb.”  There’s a quick, very funny scene where you see Kumar as she imagines him – in a turban and a scruffy beard, laughing maniacally.  She screams that he’s a terrorist.
The plane returns to the airport and Kumar is hustled off the plane as a threat to national security.  Harold is scooped up with him since he was traveling with Kumar.  They get taken to a detention center and get questioned.  One of the government agents remarks, “Al Qaeda and the North Koreans working together!  This is bigger than I thought.”  Despite the fact that both of them bring their American citizen parents in to identify them, they get shipped off to .
With little hope of ever getting to talk to a lawyer, they decide they have to escape if they are going to survive.  They manage to do this and decide to travel to to enlist the help of a man they know whose father is in the State Department.  Like the first movie they get a whole bunch of distractions and roadblocks on the way, not the least of which is Neil Patrick Harris.
Once again he plays a parody “Neil Patrick Harris”, who is a coke fiend and womanizer.  He joins them for the trip until he gets sidetracked in a whorehouse.  Something pretty bad happens to him, but you should stick around after the closing credits for one very funny last scene with him.
Along the way Harold and Kumar also run into a certain Commander-in-Chief who shares his home and some mighty fine pot with them.
Eddie Kaye Thomas, David Krumholtz, and Paula Garces appear again as their characters from the first movie.  Christopher Meloni appears again, but as a different character from the first movie.  There is also a cameo by Beverly D’Angelo.
Like the first movie, both the theatrical version and an unrated version were released on DVD.  The unrated version primarily replaced a dialogue scene at a party with an additional scene of the party goers.  The same dialogue runs over the sound of the party as the camera moves around.  This does add more nudity to the movie, but like the first film, the theatrical version has more than enough in it to earn the R rating and the unrated version does not push it beyond that.
If you have not seen the first movie you can still follow what is going on in this one.  I would definitely recommend seeing the first movie, though, just for how funny it is.
Unless you hate R rated comedies, this movie is highly (still no pun intended) recommended.
Chip’s Rating: 4 out of 5 stars