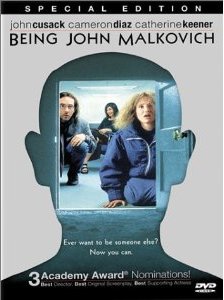 Being John Malkovich was my first exposure to the writing of Charlie Kaufman (Adaptation, Eternal Sunshine of the Spotless Mind.)  It would be an understatement to say that his mind works in ways that are different from most other people.  The result is some really unique movies.  This one is no exception.
The movie stars John Cusack and an unrecognizable Cameron Diaz as husband Craig and wife Lotte.  Catherine Keener plays Maxine, an important third in their relationship.  John Malkovich appears as “John Horatio Malkovich.”  There are also some scenes with John Malkovich’s “good friend” Charlie Sheen.
The premise:  Craig wants to be a puppeteer, but takes a job filing paperwork to make ends meet.  The job is on floor 7 ½ of an office building.  There is a whole employee orientation film that explains the owner of the building had it made for his wife, who was a little person.  There is a running joke about having to do emergency stops on the elevator between floors 7 and 8 to get off.
Craig hits on Maxine, a fellow office worker, who is lukewarm to him.  One day they move a filing cabinet and find a portal behind it.  Craig goes into the portal and finds himself in the mind of John Malkovich.  Everything Malkovich sees, hears, etc. Craig does, too.  After 15 minutes he is ejected and ends up in a ditch on the side of the turnpike.
Craig, Lotte, and Maxine decide to sell trips into Malkovich’s brain.  Craig wants Maxine, but Maxine wants Lotte, but only when Lotte is in the mind and body of John Malkovich.  While all this is going on, John Malkovich has come to realize that something isn’t quite right and manages to track them down.  What happens when John Malkovich goes into the portal to John Malkovich’s mind?  The movie shows you.
Craig decides that if he can figure out some way to stay in John Malkovich’s body he can have Maxine, and he can finally have a successful career as a puppeteer, capitalizing on Malkovich’s fame.
Did I mention that Charlie Kaufman writes some really unique movies?
After I saw this film, I said that John Malkovich must have a lot of guts to agree to do the movie.  In addition to first time screenwriter Kaufman, the movie was also the first one for director Spike Jonze (Adaptation, Where the Wild Things Are), who was mostly known for directing music videos.  It could have ended up making Malkovich look really silly.  He probably liked the challenge of playing different people inhabiting his body.
Cusack and Keener do their usual excellent jobs and this is easily Cameron Diaz’s best movie.  It received three Oscar nominations for Keener’s acting, Kaufman’s screenplay, and Jonze’s direction.  Trivia:  Cusack, Keener, Malkovich, and Jonze would all cameo as themselves filming this movie in Kaufman/Jonze’s next movie Adaptation.
Unless you have to have your movies very grounded and “normal” then I highly recommend this movie.  Even if it sounds too strange, you owe it to yourself to see something this unique at least once in your life.
Chip’s Rating: 4 out of 5 stars