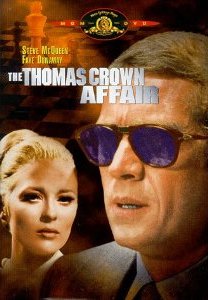 More people have probably seen the 1999 version of The Thomas Crown Affair that starred Pierce Brosnan and Rene Russo.  That was a remake of the 1968 film of the same name that starred Steve McQueen and Faye Dunaway.  I like both equally, but for different reasons.  For this post I will concentrate on the 1968 version, which includes a very sexy….chess game.
Steve McQueen plays the title character.  He is a rich banker who decides to see if he can plan the perfect robbery.  The opening of the movie shows the robbery taking place.  Faye Dunaway plays insurance investigator Vicki Anderson who comes in to see about recovering the money before her company pays out on the insurance policy.
Dunaway was fresh off her star-making turn in Bonnie and .  Here she gets to play a very intelligent, successful woman, but one who has not sacrificed her femininity.  McQueen plays a very debonair, intelligent, man’s man.  He was better known at the time from such movies as The Magnificent Seven and The Great Escape.
quickly comes to suspect Crown of being behind the robbery.  Rather than being scared, he sees it as a chance to have some fun.  rises to the challenge of trapping Crown in his own game.  She has no problem using her own attractiveness as bait to lure Crown in, but then again, Crown has no problem using his charm to lure her in, either.  They are two well matched adversaries.
The sexiest scene in the movie comes when he brings her back to his home.  She spends some time looking around his study, seeing how well he lives.  She points out a chess set.  He asks her if she plays.  The movie then spends a few minutes showing the two of them playing a game of chess.  Boring?  Not at all.
Everything about their “relationship” and their attempts to outsmart and/or out charm the other are encapsulated in this game.  They show closer and closer shots of their faces as they spar, both at chess and at sex appeal.  She starts to be more overt to distract him and win the game.  He rises to the challenge.  The scene ends with the two of them exploding in passion as the scene fades to black.  While it is implied that they had sex, none is shown.  For anyone who thinks a game of chess cannot be sexy then you should see this film.
For those people who have seen the 1999 version, there are some differences between the two movies.  In the original Crown was not in on the robbery himself; he just planned it.  The ending of the movie is also different.  In fact, the 1999 version deliberately put in some things for both of these to make viewers of the 1968 film think things were going to be the same before taking it in a different direction.
If you liked the 1999 version, then check out this one, too.  I think you’ll like it.  If you have never seen either version, then start with the original.
Chip’s Rating: 3 out of 5 stars