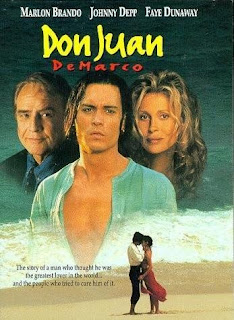 A couple of years ago I was discussing the latest Pirates of the movie with a co-worker.  She mentioned she had “a thing” for Johnny Depp.  I told her that if that was the case then she had to see his movie Don Juan Demarco.  She smiled fondly, and a little naughtily, and said that she had.

For much of his career Depp avoided movies that put him in the traditional romantic leading man roles that would capitalize on his looks.  He much preferred roles that downplayed them.  Don Juan Demarco might be the first time in his career that he played an openly romantic role.  (Edward Scissorhands and Benny & Joon were romantic, but in a weird way.)

Depp plays the title character, a young man who believes he is Don Juan, the greatest lover the world has ever known.  He ends up being treated by Dr. Jack Mickler, a psychiatrist played by Marlon Brando in one of his last roles.  Faye Dunaway plays Mickler’s wife, Marilyn.  Among the Latin beauties shown in the movie are Talisa Soto and Rachel Ticotin.

Dr. Mickler has only a couple weeks until his retirement.  He convinces the hospital to put Demarco in his care for that time to see if he can break through to him.  At the end of that time Demarco will either be released or institutionalized.

The more time Mickler spends with Demarco the more he is charmed by him.  The staff at the hospital rapidly warm to him, too.  Demarco’s tales of his life (Don Juan’s life) inspire a new sense of romance in Mickler.  He rekindles his relationship with his wife.  He even starts to wonder if Demarco might be telling the truth.

The movie opens with a very sexy scene.  A woman (Marita Geraghty) is waiting for her husband or boyfriend in a restaurant.  He is late and she is bored.  Suddenly, a man dressed as Zorro sits down across from her and introduces himself as Don Juan.  (It’s Depp.)  She laughs, but at the same time she doesn’t take her eyes off him.  They talk for a little bit then he tells her she has beautiful hands and that some women’s hands are mirrors of their bodies.  The tips of her fingers are like her feet.  (He kisses them.)  The knuckles of her hand are like her knees.  (He kisses them.)  The fleshy part of the finger above the knuckle is like her thighs.  (He kisses them.)  Finally, he says, we come to where the fingers meet each other at the hand.  (He kisses her there.)  She is gone.  She is completely his.  It’s a great, sexy little moment that plays out in a restaurant.  Yes, a discreet sex scene follows, but the scene in the restaurant is what puts this movie in this category.

Note – Tejano singer Selena makes a brief appearance in the movie singing after the end of the sex scene.  The movie was released just one week after her murder by the woman who was the president of her fan club.  This is her only movie appearance.  Jennifer Lopez had an early role as the singer in a movie biography.