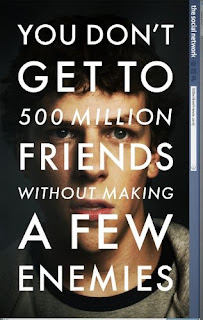 This is the movie that has won most of the other awards for Best Picture, so it is the favorite going in to the Oscars.  Critics seem to love it, but the general population seems to be a little less enthused.  When I saw it I was entertained.  There were some good lines in it.  I thought it was a good movie; I just didn’t think it was good enough to be thought of as Best Picture material.  It didn’t live up to the tremendous hype.
This movie tells the story of the creation of Facebook.  It uses the device of the main character, played by Jesse Eisenberg, being deposed for two different lawsuits as a way to flash back and show you the events.  One of the lawsuits has been brought by the co-founder of Facebook, who was squeezed out of the company.  The other lawsuit has been brought by some former college peers who originally approached Eisenberg’s character about doing some programming for a website of their idea.  He spent the time creating what would become Facebook instead.
Eisenberg gives a very good performance in this movie.  If you’ve only ever seen him in comedies (i.e. Zombieland) then this will be a good change of pace for you.  The other performance that I thought was really good was, believe it or not, Justin Timberlake.  He’s been in quite a few movies, and he hasn’t embarrassed himself, but this is the first one where I actually thought he got into the role and made it his own.  He plays the man who created Napster.
When I mentioned two good performances, you might have thought I was going to mention Andrew Garfield.  He had been nominated for a Golden Globe for Best Supporting Actor – Drama, and there was some surprise that he did not get an Oscar nomination.  I thought he did a decent job, but I don’t think he got snubbed by not getting a nomination.
The script is well-written.  Aaron Sorkin, the screenwriter, is probably going to win an Oscar for it.  There are some memorable lines, many of which you see in the trailer.  It is based on the book The Accidental Billionaires: The Founding of Facebook: A Tale of Sex, Money, Genius and Betrayal by Ben Mezrich.  Note that "sex" comes first in the list and "genius" is buried in the middle.  Guess which one sells more books?
In regards to memorable, the movie probably had the best tagline of any movie released in 2010 – “You don’t get to 500 million friends without making a few enemies.”
One note – the sound mixing wasn’t the greatest on the DVD.  There were at least three scenes that involved two people talking in a crowd and the crowd noise made the dialogue difficult to hear.  I had to turn the subtitles on in those scenes in order to follow what the characters were saying to each other.
The movie has already been released on DVD and Blu-ray, so you can see it pretty easily.  If you were already thinking of seeing it, then by all means go ahead and do so.  Just keep your expectations a little lower than “Best Movie Ever” and I think you’ll enjoy it.
Chip’s Rating: 3 out of 5 stars