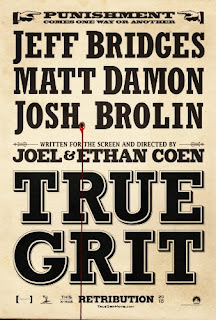 The first thing you should know is that this is not a remake of the 1969 John Wayne movie.  It is a more faithful adaptation of the original book, which was also the basis for the 1969 movie.  This version is a little more serious and has a couple of key differences in the ending (which I won’t be spoiling.)
The premise of this movie is that in the late 1800s a 14 year old girl (Hailee Steinfeld) has come to a western town to see to her father’s funeral arrangements.  He was killed by a man he had hired.  She is outraged that the law in the town doesn’t seem to put much hope behind ever catching the man.  While she is there she asks around and finds out that Marshall Rooster Cogburn (Jeff Bridges) is the toughest man around and she hires him to go after her father’s killer.  There is another lawman, a Texas Ranger (Matt Damon), who is on the trail of the killer for a different crime.  The three of them all end up going after him.
Comparisons to the 1969 movie are inevitable, so here goes:
The biggest difference is that the directors (Joel and Ethan Coen) cast a real 13 year old girl for the role, whereas the older movie cast an adult.  Hailee Steinfeld does a great job in the role and was justifiably nominated for an Oscar for what is really her first major film role.  The only problem is that the nomination is for Best Supporting Actress when she is the main character in the movie.  The 1969 movie focused on Marshall Cogburn, since it was John Wayne playing him.  This movie focuses on the girl.  There is a great scene early on where she is negotiating with a trader in the town to deal with her father’s horses.
Another difference is that Jeff Bridges plays the role of Marshall Cogburn more seriously than did.  He still is a drunkard and there is still humor about that, but overall he’s playing closer to the original book.  If your favorite scene from the 1969 movie is where Cogburn takes the reins in his teeth then I can confirm that is in this version, too.  I have to give the edge to John Wayne on that one, though.
The third major character is played by Matt Damon.  He was played by Glen Campbell in the original.  was many things, but he was not a very good actor.  Damon is definitely a step up from .  He also plays the character as less likable than did.
Without going into any key details on the ending, I will say that it has left some people feeling that it doesn’t fit with the rest of the movie.  I’m one of them.  It is an epilogue shown many years after the events of the film.  Because there is a new actress playing the main role, though, there just isn’t the emotional resonance that you’ve built up over the last 90+ minutes with Steinfeld’s performance.  I was left knowing I was supposed to be feeling something, but I just didn’t connect with the character.
This is the only negative I found with the film though.  Unless you hate westerns, you should see this movie.  It is playing in theaters.  The DVD and Blu-ray release dates have not been set, but they are available for pre-order now.
Chip’s Rating: 4 out of 5 stars