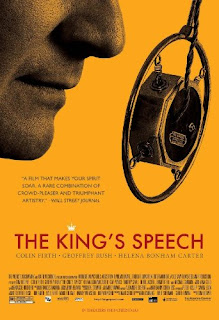 This movie is the one that might beat out The Social Network for the Best Picture Oscar.  It recently won Best Picture from the Producers Guild, which some people feel means it has a chance against The Social Network, which has won most of the other Best Picture awards.  Combine this recent win for The King’s Speech with the fact that it got the most nominations and some people are thinking this might even be the favorite.
One place where it is the favorite is for Best Actor.  Colin Firth gives a great performance as the Duke of York, a man who stammers quite badly.  Because of his position in the royal family, though, he has to give many public speeches and the new invention of the “wireless” (radio) is making things even worse.
At a few points in the movie Firth did too good a job for me.  The particular kind of stammer he has is one where he is almost gagging trying to get the words out.  I found myself feeling like I was gagging a couple of times when he went on for several seconds.
Both Geoffrey Rush, as the therapist who helps him try to overcome his stammer, and Helena Bonham Carter, as the Duke’s wife, were also nominated.  Rush definitely deserves to be nominated.  He plays a commoner who is every inch the equal in will to the Duke.  Bonham Carter certainly did a decent job, but it feels like her nomination is more of a throw in because the Academy just liked the movie so much.
I’ve hesitated to go into more detail on the movie because even though it is based on true events, not all of you may know the historical facts.  Even if you don’t know anything about the real people portrayed in this movie, though, you’ve seen any number of other movies where the main character has some challenge to overcome, so you can probably figure out what it going to happen in this movie.
I will mention the R rating this movie got from the MPAA.  All around the rest of the planet this movie was rated either for all ages, or for all but the youngest children.  It has not a hint of sex, nudity, or violence in it.  What it does have are a couple scenes where the therapist has the Duke shout out a long string of curse words as a technique to conquer the stammer.  It probably doesn’t matter, though, since younger kids would likely be bored to death by this movie.
Unless the only kind of movie you watch is one with lots of action, you will probably like this movie.  It is playing in theaters right now.  The release dates for the DVD and Blu-ray have not been set, but they are available for pre-order now.
Chip’s Rating: 4 out of 5 stars