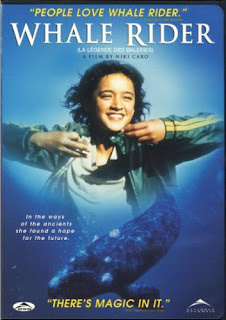 This film is an example of the little movie that could.  Everywhere it was shown at film festivals it won audience awards and left people giving standing ovations.  When it was released to the general public there was no marketing campaign to back it up, so you may not have heard of it.  I never heard of it myself until it came out for home rental.  I’m here to tell you that once you’ve seen this movie, though, you will never forget it.
The premise is that a young Maori girl (Keisha Castle-Hughes in her screen debut) has been raised by her grandfather and grandmother after her mother and male twin died in childbirth.  Her father, in his grief, left her and his people behind.  This is big because her father was to be the next leader of his people.  This line of chiefs stretches back unbroken thousands of years to the mythical Whale Rider, who their legends say first brought the Maori people to the shores of .  If the father will not accept the leadership, and if he has no sons, then there will be no one to take over when the grandfather is gone.


The girl, named Paikea after the original Whale Rider, obviously has what it takes to be a good leader for her people.  Her grandfather, despite loving her tremendously, just cannot conceive of breaking thousands of years of tradition.  He finally institutes a series of tests for the Maori boys to see which of them can be found worthy.  Suddenly, a big event brings changes to the lives of all of the people.
Keisha Castle-Hughes was tremendous in her role as Paikea.  She presented a great combination of being a natural leader in one scene and a little girl wanting her grandfather’s love and respect in the next.  Her performance is both heartbreaking and uplifting.  I am man enough to admit that she made me cry in a scene where she recites a speech for her grandfather.  Her performance was so good in this scene that they didn’t even have her do a second take.  Watch the extras on the DVD.  They have her screen test with the actor who played her father.  It’s a tender scene between a father and daughter and she made the actor tear up in real life, too.  All of this from a girl who had not so much as even acted in a school play before doing this movie.
There was a lot of speculation when it came time for the announcement of the Oscar nominations.  Great child performances usually end up being given a Best Supporting Actor/Actress nomination, but in this movie she was most definitely the star and focal point of the story.  No one anywhere near her age had ever been nominated for Best Actress, though.  When they were finally announced it was another triumph for this little film.  Castle-Hughes became, at the age of 12, by far the youngest women ever nominated for Best Actress.
Please don’t make the mistake of thinking this movie is some preaching manifesto about feminism, or that it is a movie only for 12 year old girls.  It is not preachy and the movie is for the entire family, whether they are 8 or 80.
By the way, I rarely pay attention to the MPAA ratings since their organization is so hypocritical as to be beneath consideration (see the documentary This Film is Not Yet Rated, for instance.)  I do realize many parents use the ratings as a guide, however.  This movie’s PG-13 rating for “drug references” may set the record for being the most ridiculous to come from the MPAA.  Do not be put off by it; this is definitely a movie that younger children can watch.  The only “drug reference” in the movie that I can possibly think of is a couple second shot of what may or may not be a pot pipe hanging on a cord around the neck of one of the characters.  That’s it.  Drugs are never mentioned and no one is shown doing any kind of drugs.
Everyone I know who has seen this movie has enjoyed it.  I love it, have seen it multiple times, and I cannot recommend it enough.
Chip's Rating: 5 out of 5 stars