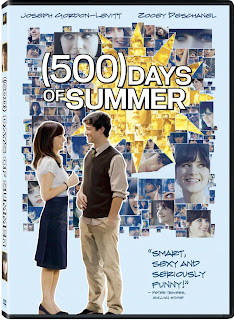 This is not a love story.  That’s what the movie tells you right from the beginning.  Despite those words it has many of the elements of a love story, but not with all the clichés that come with those.  What the movie is is a refreshing, sometimes humorous, sometimes touching, more realistic, and possibly even original, look at the relationship of a man and a woman.
It stars Joseph Gordon-Levitt (3rd Rock from the Sun, 10 Things I Hate About You, Mysterious Skin, Brick, Inception) as Tom Hansen and Zooey Deschanel (Almost Famous, The Good Girl, Elf, Hitchhiker’s Guide to the Galaxy) as Summer Finn - the “Summer” in the title.
The Tag Line for the movie is “Boy Meets Girl.  Boy falls in love.  Girl doesn’t.”
The premise is that Tom is working for a greeting card company when he really had wanted to be an architect.  He’s not taking a lot of pleasure in his job.  Summer starts working there and he immediately strikes up a connection with her, at least from his perspective.  He almost immediately decides she is “the one” and starts strongly courting her.  She tells him right up front that she doesn’t believe in love and that she is not going to get into a relationship with him.  She doesn’t reject him outright, though, so that sends him enough signals that she just needs some convincing and they’ll live happily ever after.
The “(500) Days” refers to the length of time in their relationship that we see in the movie.  The story is non-linear.  The movie starts with Summer having told Tom it’s over, but that’s not the 500th day.  His little sister, played by Chloe Moretz (Kick-Ass, Let Me In), gives him some great advice, which is to think through everything that happened with Summer.
It’s while Tom is doing this that we get snapshots of different periods of their relationship, so we may see a time when they were moving apart, followed by an earlier, happier time, followed by a reconciliation, etc.  You always know where you are because they tell you what number day it is on the screen.
The musical sequence comes right after Tom and Summer have gotten together.  He’s walking to work and all of a sudden he starts dancing, then people around him join in, until it’s practically a scene from an old movie musical.  It’s not meant to be taken literally; it’s a great metaphor for how he is feeling inside.  He starts doing better at work.  He’s happy for the first time in a long time.  This is an early day, though, so you know harder times are ahead.
The movie is obviously based on real events in the screenwriter’s life.  A disclaimer appears at the beginning of the movie, “AUTHOR’S NOTE: The following is a work of fiction.  Any resemblance to any persons living or dead is purely coincidental.  Especially you Jenny Beckman.  Bitch.”  He appears to still be working out some issues.
The thing is, this movie is not a hatchet job on the female character.  She’s not presented as a bitch.  Even though she is the one for him, she lets him know that he’s not the one for her.  He is the one who continues to pursue her, hoping to convince her to change her mind.  While you may not like all the things she does, is it her fault when she was honest with the guy from the beginning?  How about when her actions seem to sometimes contradict her words?
I won’t spoil the ending, but I do have to say that it is definitely fitting and I thought it was terrific.
By the way, this movie actually has an 8.0 rating on IMDB – almost unheard of for one that deals with relationships.  It is evenly split, too, with over 60,000 males giving it an 8.0 and over 16,000 females giving it an 8.1.  It is also equally loved by critics.  On Rotten Tomatoes it has an 87% fresh rating, even higher than the rating for Gordon-Levitt’s most recent movie Inception (86%.)
If you are looking for something other than the seen-it-all-before romantic comedy then I highly recommend this movie.
Chip’s Rating: 4 out of 5 stars