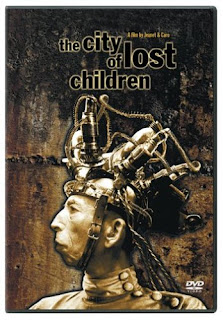 The best way to describe this movie is that it is a dark fairy tale; far more Brothers Grimm than sweet innocent story.  A modern day equivalent might be the stories of Roald Dahl.

It stars Judith Vittet as brave little street orphan Miette and Ron Perlman as a kind circus strongman named One.  The two of them are opposed by a mad scientist who is kidnapping children to take their dreams from them, since he cannot dream himself.

The movie is filled with stunning visuals and eccentric characters, including a half dozen clones and a set of Siamese twin sisters joined at the foot.

Vittet does a great job as the street orphan who helps and is helped by Ron Perlman’s strongman.  She didn’t stay in acting, though, preferring to go back to school.  Now that she has graduated it looks like she is getting back into filmmaking, but in behind the camera activities like costuming and set design.

Ron Perlman (TV’s Beauty and the Beast, films The Name of the Rose, Enemy at the Gates, Hellboy) had a big challenge because he not only had to speak French, a language he was not familiar with, but he had to also do it with a Russian accent.  He said he loved working with Vittet, though, because she reminded him of his own children.

Overall, this is a strange, kind of skewed movie, as most fairy tales are.  It may not be for everyone, especially those who want their movies to be “normal.”