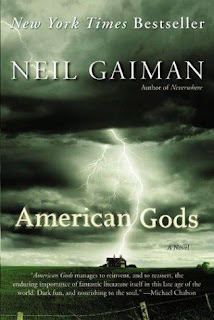 How to describe this book?  Is it Adventure?  Is it Ghost Story?  Is it Suspense?  Is it ?  Is it Road Trip?  Is it Coming of Age?  Is it Fantasy?  Is it Myth?  Is it Commentary?  Is it darkly humorous?  The answer to all of those would be “yes.”  At its heart, though, it is a love letter to the sometimes forgotten from a British author.
The author, Neil Gaiman (Stardust, Coraline, Sandman), spent quite a bit of time driving around the country, stopping at various roadside attractions, as he was working on this novel.  (He has since moved to the to live permanently.)  A number of these attractions appear in the book as his characters also encounter them.  He actually put a disclaimer at the beginning of the book warning the reader that even though these places are real, this is not a guidebook.
How to describe the plot?  Well, when all the immigrants came to they brought with them the stories, myths, and tall tales from the Old Country.  What if those archetypes had come with them?  What then would happen to those “gods” once those immigrants’ children and grandchildren forgot about them as they assimilated and became American?  What if the new “gods” of technology, the internet, etc. took the place of these old gods?
The book opens with a man, Shadow, in prison.  He is released early when his wife is killed in a car crash.  On the trip home he is approached by a man calling himself Mr. Wednesday.  If you know the origin of the word “Wednesday” then you get the reference and know who this is.  If you don’t know it then I will not spoil it for you.
Mr. Wednesday tells him he needs an assistant, someone to run errands, be his driver, and, if necessary, see to his affairs if he should die.  He tells Shadow that a storm is coming and that he needs to meet others to discuss what is ahead.  Shadow agrees and they travel around the country contacting other people that Mr. Wednesday knows.  While doing this Shadow comes to realize there is more to Mr. Wednesday, the people he is meeting, and even himself, than he first realized.
I can’t really describe the book further without giving away major pieces of it.  I will point out that this book was a bestseller and a multiple award winner.
On a final note, after writing this recommendation I’ve convinced myself.  I’m going to take it down off my bookshelf and read it again.