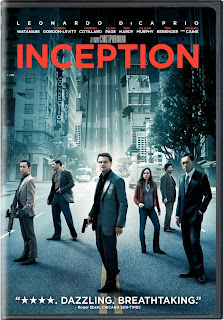 Regardless of the high-brow, Oscar-bait other movies nominated for Best Picture, Inception is probably the one that generated the most talk before, during, and even after it was released.  Despite attempts on my part to know nothing about the movie before I saw it, even I heard two things: 1. it’s hard to understand; and 2. there’s a lot of talk about the ending.

First, what is Inception?  Well, the dictionary definition is that it is the start of something.  I think some people are confusing this with “conception”, as in an idea, especially in light of what the movie is about.

So what is the movie about?  It is the near future and technology exists that allows your consciousness to enter the dreams of others.  People use this technology to extract secrets.  Leonardo DiCaprio and Joseph Gordon-Levitt play two men who hire themselves out to get these secrets for rich and powerful people.

One day, though, a client comes to them with a different task.  He wants them to actually plant an idea into the mind of another man, rather than just extract information.  They explain that you can’t just plant an idea because the person would realize that it was artificial.  They could possibly plant an inception of an idea so deep into the man’s dream subconscious that he would not even be aware that he was entertaining a different thought.

I think this is where some people found the movie to be hard to understand.  They show events happening on all the different dream levels.  Personally, I didn’t find it that hard to follow what was going on.  The writer/director (Christopher Nolan – Memento) did a good job of keeping them separate.  He also explained what you could and couldn’t do in these dream worlds, how to get out of them, and the dangers if you get trapped there.

I think that the confusion is a result of the general problem affecting movie-going today – a lot of people don’t actually watch movies anymore.  If they are in the theater they are talking on their cell phones, texting, talking to the person with them, leaving to get snacks and drinks, leaving to get rid of the 64 ounce soda they drank, etc.  If they are at home, they are going to the kitchen, getting interrupted by kids, paying bills, talking on the phone, being on a laptop, etc. - all without pausing the movie.  The result of these things is that scenes are either missed entirely, or they are only listened to with part of their brain.

Inception is not the kind of movie where you can miss parts of it and still know for sure what is going on.  Nolan’s earlier movie Memento was like that, too.

As for the talk about the ending of the movie, it comes from it being a little “lady or the tiger” in presentation.  My opinion is that this was a calculated move on the part of Christopher Nolan to generate talk about the movie.  He was very successful.  The thing is, he didn’t really need to do this.  He should have had enough confidence in his own movie to know that it would have generated a lot of talk even without the way he presented the ending.  I actually thought the way he ended it cheapened the movie just a little because I saw it as a gimmick.

The movie has great special effects, of course.  The dream worlds they are in have rules and physics all their own.  One thing that shows people don’t see many older movies, though, was the reaction to a scene where a hallway and room are rotating on two people, with them scrambling on walls and ceilings while it happened.  Fred Astaire had been-there-done-that sixty years earlier when he literally danced on the ceiling in Royal Wedding (1951.)


In addition to DiCaprio and Gordon-Levitt, Inception also stars Ellen Page (X-Men 3, Juno), Ken Watanabe (The Last Samurai, Letters from Iwo Jima), Cillian Murphy (28 Days Later, Red Eye), Tom Berenger (Platoon, Major League), Marion Cotillard (A Good Year, La Vie en Rose), Pete Postlethwaite (In the Name of the Father, The Usual Suspects), Michael Caine (Children of Men, many others), and Lukas Haas (Witness, Brick.)  Despite these people having fourteen Oscar nominations and three wins among them, there was not one acting Oscar nomination this year from Inception, evidence that the prejudice against popular big budget movies is alive and well.

Unless you don’t ever have a couple hours to actually watch a movie, I highly recommend this film.  It is available on DVD and Blu-ray, so it is easy to see.