Movie – The Adventures of Baron Munchausen (1988) 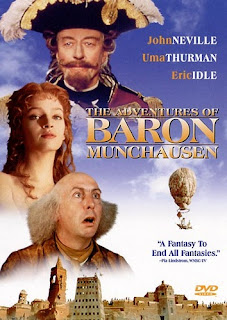 This movie stars Sarah Polley (The Sweet Hereafter, Go, John Adams) as a little girl caught up in a great adventure with the famous Baron Munchausen (John Neville.)  Appearing in supporting roles are Eric Idle, Oliver Reed, Uma Thurman, Jonathan Pryce, and “Ray B. Tutto” who looks, sounds, and acts exactly like Robin Williams.  (It is Williams.)
The premise is that an acting troupe is trying to put on a play about the famous Baron Munchausen, who tells unbelievably tall tales about his adventures.  They are interrupted by an angry man in the audience.  It turns out it’s the real Baron Munchausen and he tells them that they’ve got the stories all wrong.  Through a series of events, the daughter of the acting troupe leader (Polley) gets taken along for a bunch of adventures with this real Baron Munchausen.  They travel to the Moon, meet gods and goddesses, and get swallowed by a fish, among other things.
Polley’s character of Sally Salt doesn’t take guff from anyone.  When her father posts handbills advertising the acting troupe as “Salt & Son” she demands to know where her brother is, since she doesn’t have one.  The father tries to explain to her that that’s how things are done and it just wouldn’t be proper to advertise as “Salt & Daughter.”  (It’s the 18th or 19th century.)  When Baron Munchausen gets distracted by the goddess Venus (Uma Thurman) Polley very deliberately walks off, retrieves his hat, comes back, and demands that they keep trying to find a way home.  Those scenes could have come across as shrill or bratty, but she played them perfectly.
The movie was considered a flop, but that has nothing to do with the quality of it.  Terry Gilliam (Monty Python, Time Bandits, Brazil) made it for a then massive $40 million, but the studio, whose leadership had changed, decided that it was really an arthouse film and marketed it that way instead.  It did huge box office for an arthouse film, but it fell far short of making back its budget.
The money spent on it is definitely up on the screen.  The movie features stunning visuals at a time before CGI became a tool for filmmakers.  One scene in particular stood out.  The characters are on a ship at night on the ocean.  The ocean is as still as glass and you can see the stars reflected in it.  The water starts to ripple the image of the stars as the ship sails into frame.  Very gradually, though, the ripples in the water/stars transition to ripples in sand and the ship comes to a halt.  They have “sailed across the stars” and have arrived on the moon.  All of the people I was watching this with the first time let out a collective “whoa” at this scene.  Kids raised on constant CGI movies might not think anything special of this scene now, but at the time it was a stunner.
The film is excellent for all ages.  The only scene that might give parents pause at first is in there intentionally as a joke on dirty minded adults.  The King and Queen of the Moon have heads disconnected from their bodies, but they still feel what is going on with their bodies.  At one point the Queen’s head starts making funny faces and noises and little Sally Salt asks Baron Munchausen what is wrong with her.  He tells Sally that the King is tickling the Queen’s feet and she accepts this.  All the adults watching are, of course, thinking, “He’s doing a lot more than tickling her feet.” The payoff comes when they run across the bodies of the King and Queen and you see that the King’s body is, in fact, tickling the feet of the Queen.
This movie is highly recommended for all ages.
Chip's Rating: 5 out of 5 stars